With only one day in Munich, you have to choose your route carefully. So here’s our easy to follow guide of the best things to do in Munich in a day.

Getting Around Munich + Tips

Getting around Munich couldn’t be easier. There are generally 3 options:

Before we start, if you’re looking for transfers from the airport to your hotel, you can secure a cheap and easy Munich Airport – City Bus Transfer here.

There are metro lines running throughout Munich, and these are the easiest ways to get around the city.

We grabbed a Metro Day Pass which allows unlimited travel for 24 hours on the metro, and jumped on the underground in-between tourist spots.

The Metro Day Passes are available to purchase at any station, or online here, and cost €7.80 per adult.

Some of the gaps between destinations are walkable, depending on how much ground you wish to cover and how much time you have.

By Hop On Hop Off Bus:

Standard buses are available around Munich.

However, there is also of course the famous Munich Hop-on, Hop-off Sightseeing Bus.

This bus lets you jump on and off throughout the city, and explore monuments such as Nymphenburg Palace, Olympic Park, the English Garden, the historic Old Town, Odeonsplatz, Marienplatz, and much more.

This option is always popular among tourists, and a is great way to see many famous landmarks around Munich at ease.

Some of the best days out we’ve had in Munich have been on private tours.

From food tours, to castle trips and beer tasting, there’s plenty to keep you busy in the bustling city! 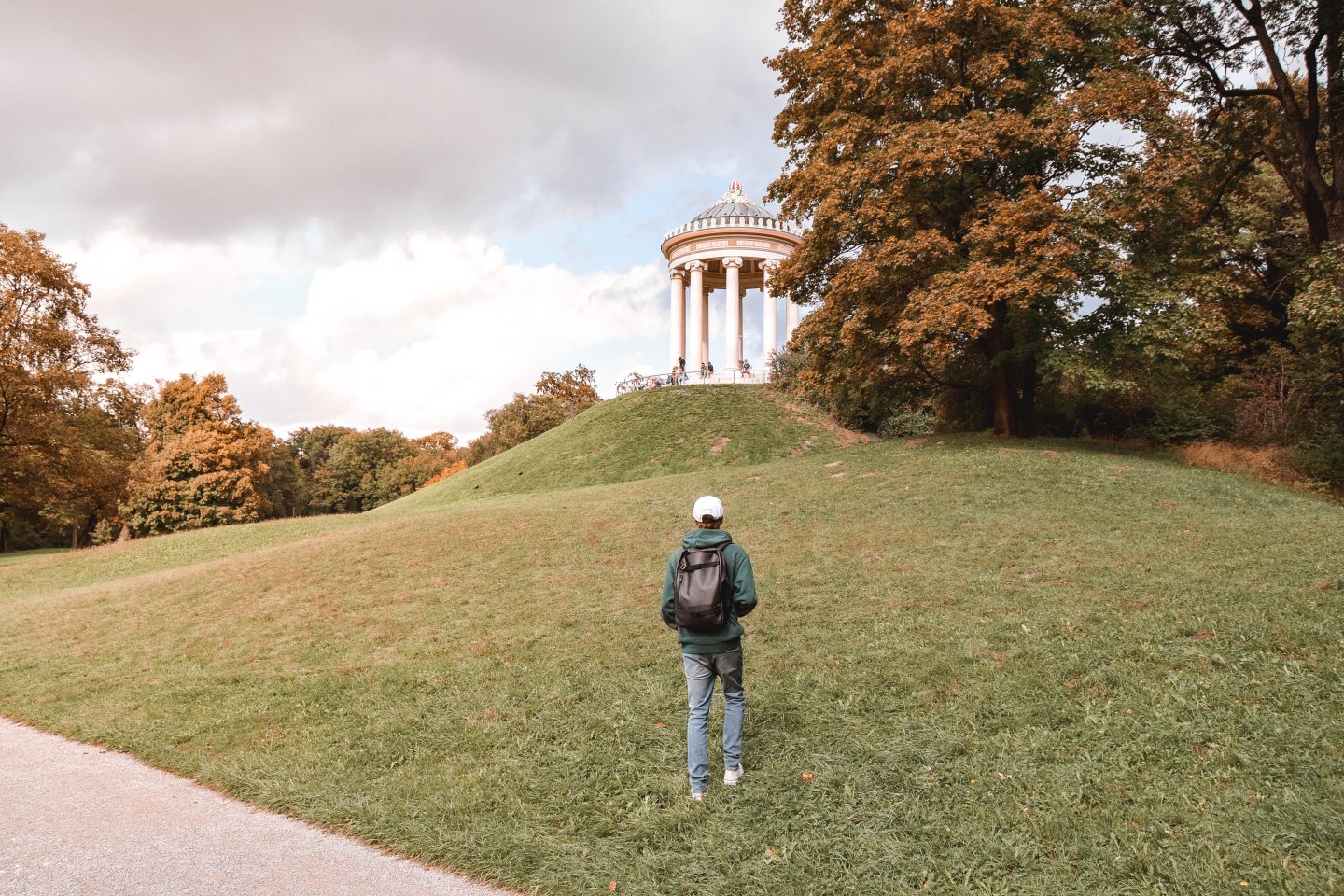 Charlie exploring the best of Munich in a day.

If you only have a day in Munich then why not make the most of it.

Marienplatz is at the top of most peoples things to do in Munich in a day itinerary. With the most popular sights in Marienplatz being the Old Town Hall, the New Town Hall, and the famous Glockenspiel.

We got up at sunrise to see Marienplatz, the city’s central square, as it was far less crowded than when we returned a few hours later.

There are plenty of tours available around the city centre, such as the Discover Munich 2-Hour Small Group Walking Tour, or you may just want to explore alone.

Either way, Marienplatz is the most popular area of the city and has been the city’s main square since 1158.

With shops and local cafes to browse if you’re looking for souvenirs, or typical Bavarian food, then here is a good place to start!

An easy place to start with your one day in Munich! 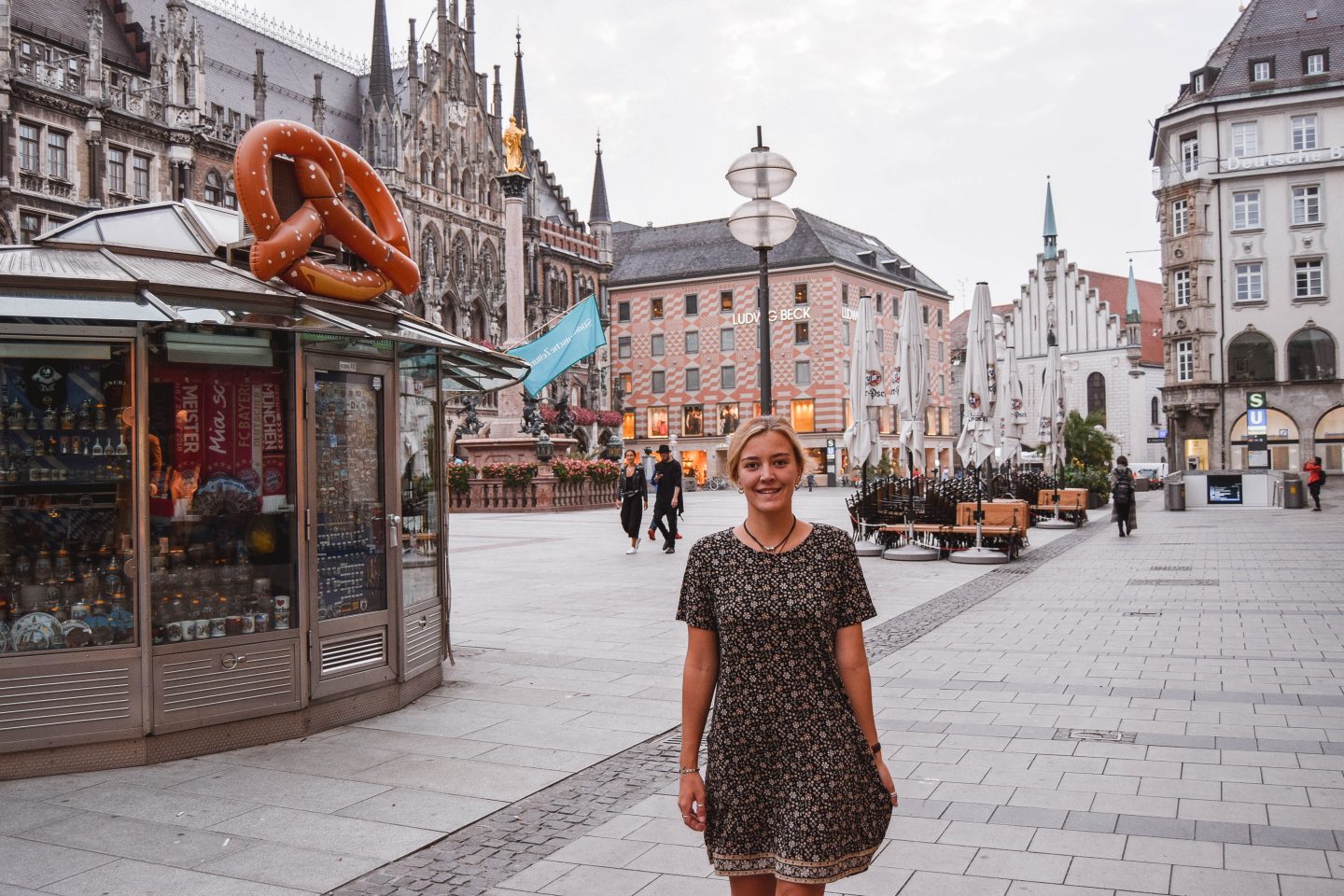 Lauren having an early stroll around Marienplatz 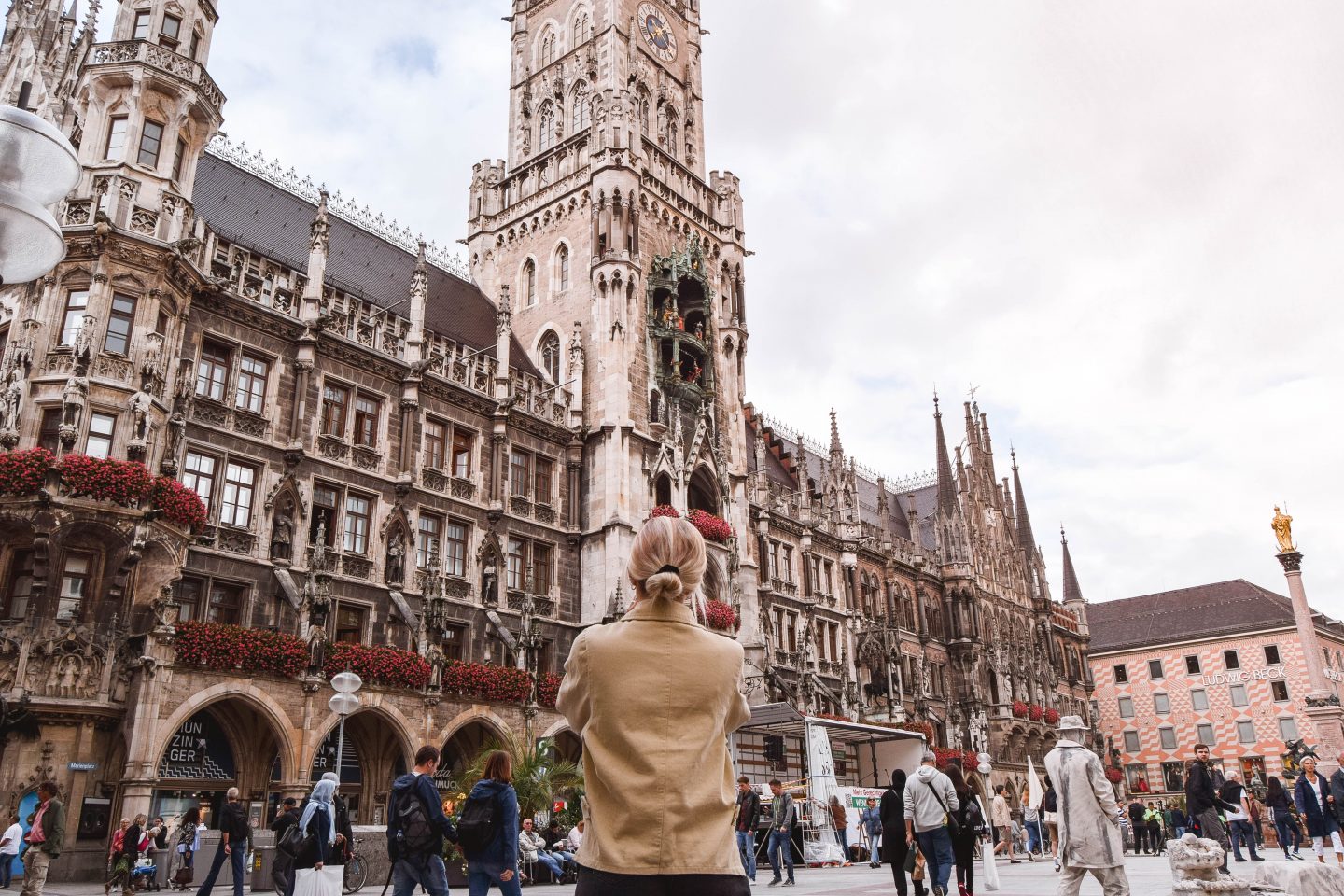 So when we put out a question on our Instagram, asking what are the must see things to do in Munich in a day, there was one overwhelming response!

The Englischer Garten, or English Garden, is a large public park in the centre of Munich. It stretches from the city centre to the northeastern city limits. Although the nature wasn’t what our followers were advising us to check out.

There is a river that flows through the garden called Eisbach river and thanks to a permanent wave that has been formed you can catch SURFERS in the middle of Germany all around the year.

If you’re looking for a great group activity, you could book onto the Classic 4-Hour Bike Tour of Munich.

Here you’ll discover Munich’s old town, ride through the beautiful English Garden, and see the Isar River surfers, all on two wheels with an expert guide.

We couldn’t believe our eyes when we turned up to see dozens of surfers, male and female, old and young lining up to jump in from the sides and ride the waves.

Definitely a MUST on your one day in Munich itinerary. 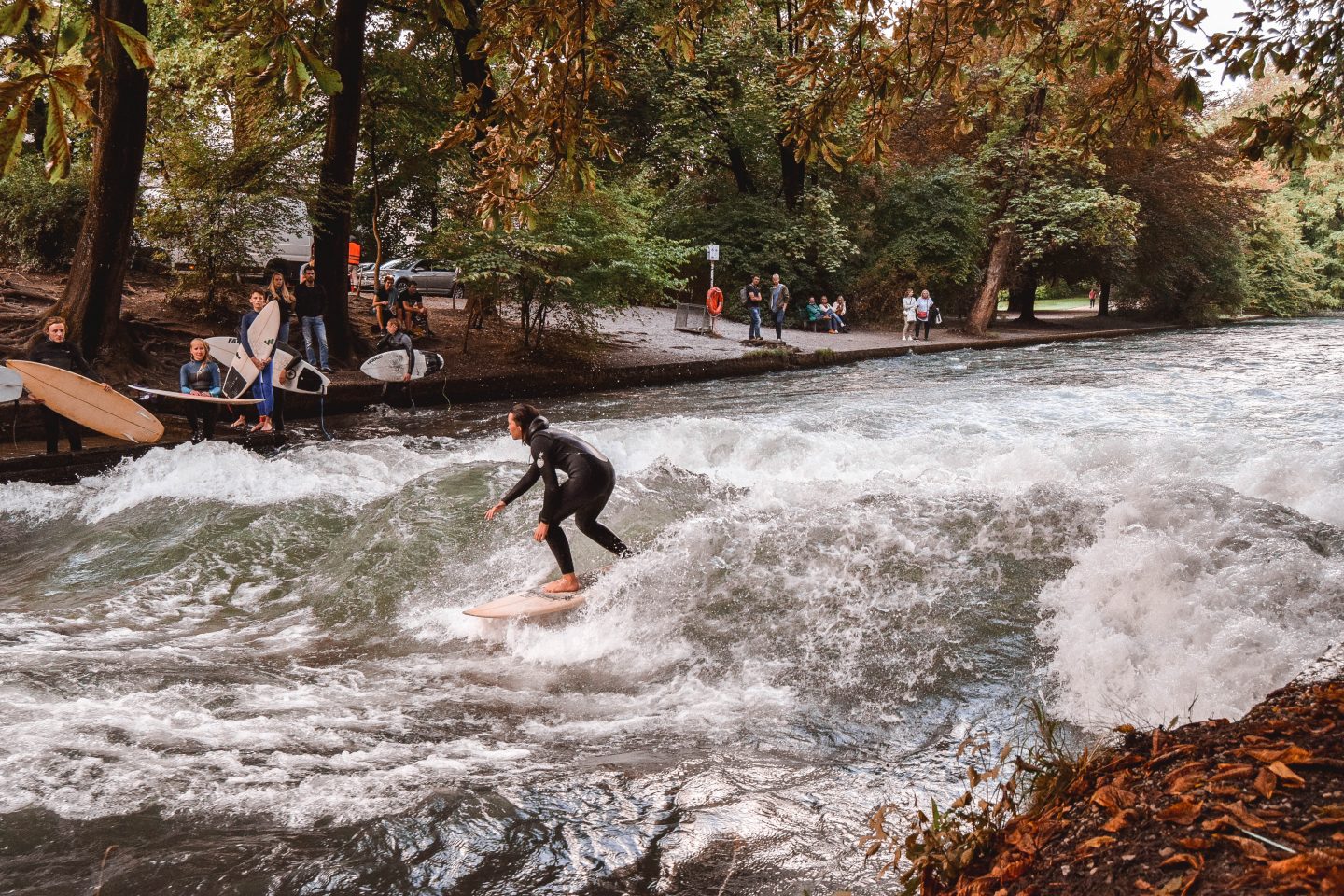 Check out the surfers at Englischer Garten is a must! 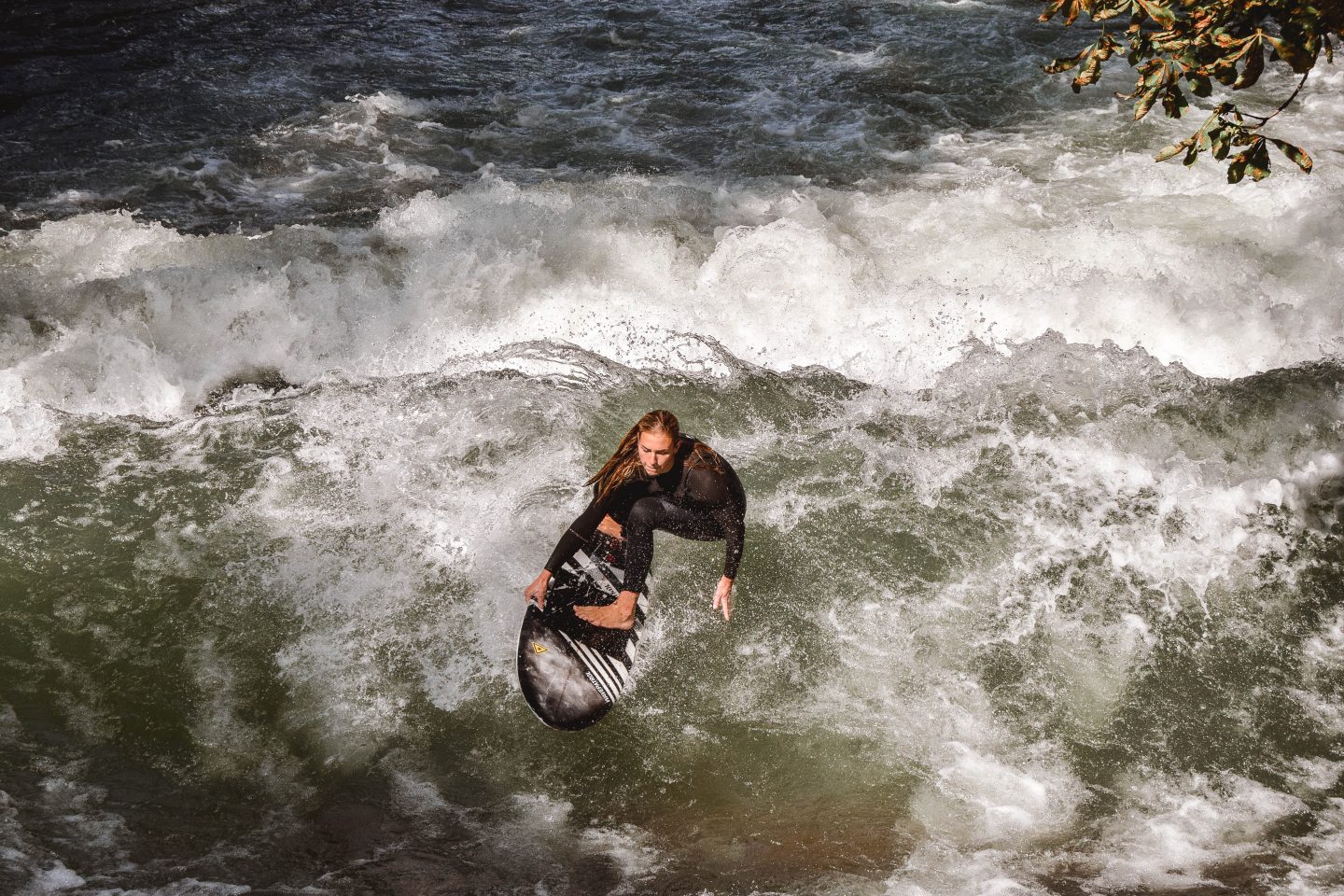 Look at them go!

After spending the afternoon at the English Garden, and stopping for snacks, we had to see what all the fuss was about in terms of beer halls.

There are many beer halls scattered around the city, however the Hofbrauhaus is the most popular and most famous one in town.

The Hofbrauhaus is a 3-floor beer hall dating back to the 16th century, with a Bavarian restaurant, shows & upbeat vibe.

We walked into traditional Bavaria as soon as we entered the beer hall, and if you’re looking for something to do with your evening this has to be on the things to do in Munich in one day list.

There are also some great beer tours such as:

Munich: An Evening of Bavarian Beer and Food Culture – Where you visit the heart of Munich’s beer and food culture, spend 3 hours sampling the best of traditional Bavarian food and beer, and take an exclusive tour of the Oktoberfest Museum.

Whatever you choose to do with your evening, we recommend ordering a giant pretzel, a beer and some traditional Bavarian food.

This way you’ll get to truly soak in the atmosphere of Bavarian culture and finish your one day in Munich off perfectly! 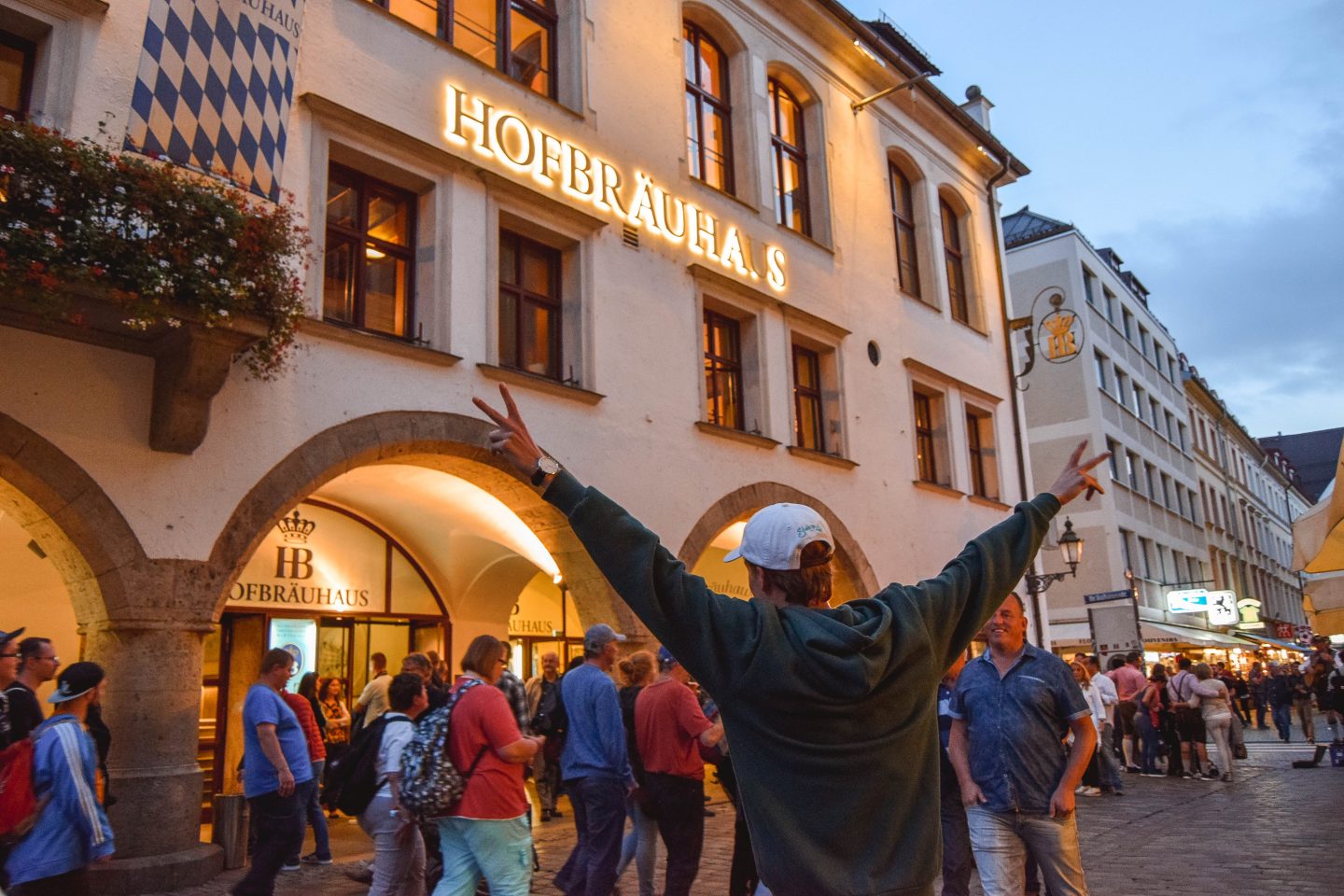 Hofbrauhaus Beer Hall – the perfect way to end your one day in Munich! 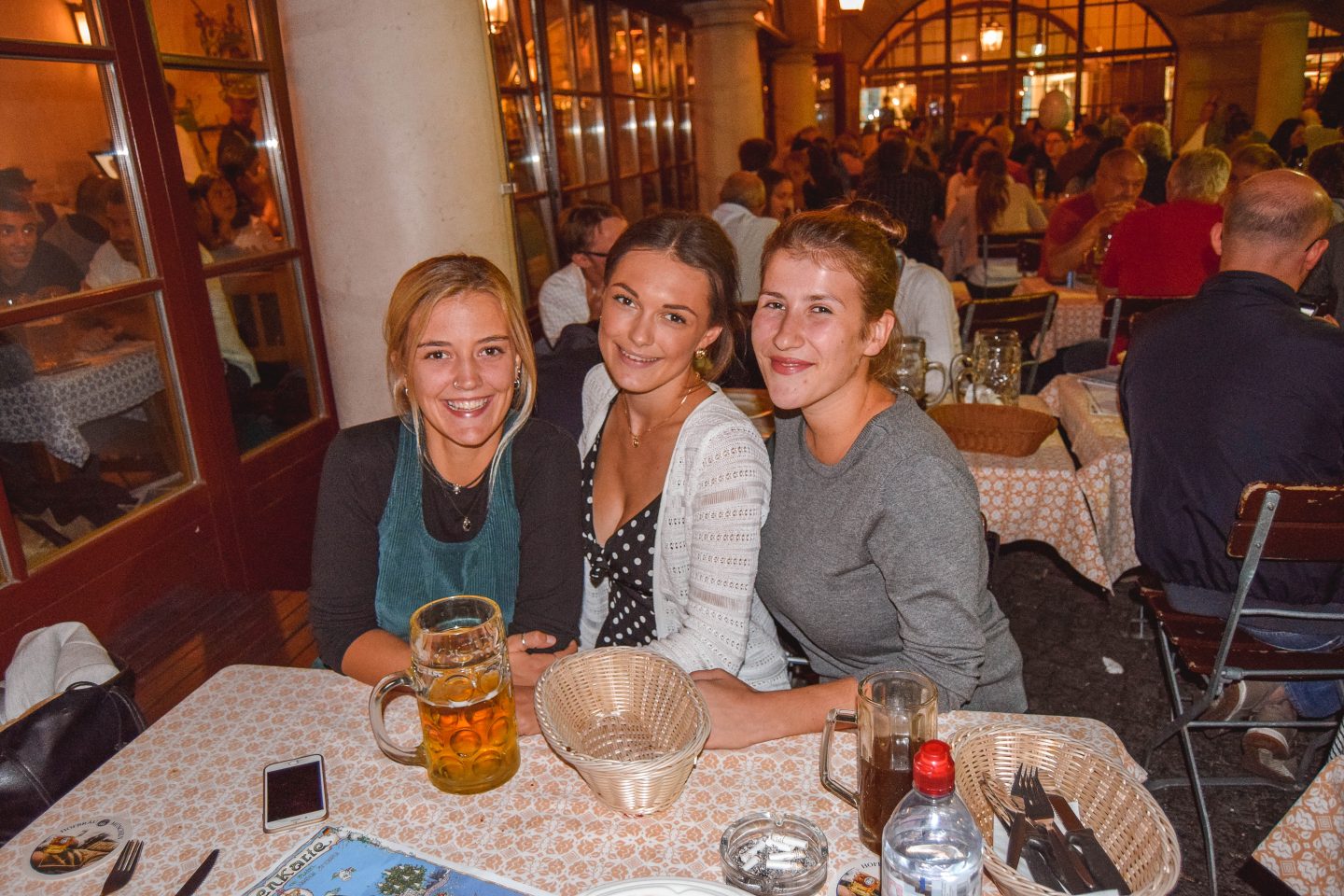 Thanks to Isabella and Patricia for making our one day in Munich a memorable one!

Where To Stay In Munich

Luxury – Le Méridien Munich – Featuring an attractive lobby and a spa area with one of the city’s longest hotel pools, this hotel is located just 50 yards from Munich Main Station in the heart of the city. It offers designer interiors, free WiFi for up to 3 devices and free admission to selected cultural sights. Le Méridien Munich offers air-conditioned rooms with rich carpets and a 42-inch flat-screen TV. The marble bathrooms include a modern shower. Many of the quiet rooms face the leafy courtyard. Guests can enjoy luxurious complimentary toiletries.

Mid-Buget – Arthotel Munich – Arthotel Munich is a 3-star superior hotel, 5 walking minutes from Munich Central Station and the Oktoberfest site. This non-smoking hotel offers soundproofed rooms, free WiFi and a daily breakfast buffet. The interiors feature pop art. The spacious rooms at the Arthotel Munich include minibars and TVs with cable channels. Each room has a private bathroom with hairdryer. Some rooms in the annex offer elevator access and air conditioning in summer.

Budget – wombat’s CITY Hostel – Boasting excellent transport connections, this modern hostel next to Munich‘s central railway station is just a 10-minute walk from the pedestrian area and the old quarter with its Marienplatz square. An ideal base for travellers on a budget, the Wombat’s Hostel Munich provides well-kept, functional rooms with en-suite facilities. Many rooms also feature a balcony. Free internet access is available in all communal areas.

For more places to stay in Munich you can check the latest prices here.

Top 9 FUN Things To Do In Prague

Vienna In A Day – Things To Do In Vienna Itinerary

Top 11 Things To Do In Brussels In A Weekend