If you’re looking for the best things to do in Bratislava in a weekend, then look no further. Here’s a complete guide for those with 2 days in Bratislava.

Getting Around Bratislava + Tips

Getting around Bratislava couldn’t be easier. There are generally 3 options:

Before we start, if you’re looking for transfers from the airport to your hotel, you can secure a cheap and easy Bratislava: Airport to Hotel Private Transfer Service here.

The most convenient way to explore Bratislava, is with a little help from public transport.

You can buy a Bratislava Card here, which allows unlimited use of all public transport for 24, 48 or 72 hours in the Bratislava Region.

The Bratislava Card also gives free access to 14 museums and galleries in Bratislava, plus more than 100 discounts of up to 50% on attractions, restaurants, shops, and leisure activities, so it’s certainly worth the investment.

Standard buses are available around Bratislava, with the Bratislava Card.

However, there is also of course the famous Bratislava by Sightseeing Bus.

Experience beautiful Bratislava Castle as you gaze out over the charming Slovak capital. Ride the sightseeing bus along the Danube River while listening to audio commentary about the passing monuments, then explore Bratislava’s historic Old Town.

This option is always popular among tourists, and a is great way to see many famous landmarks around Bratislava at ease.

Some of the best days out we’ve had in Bratislava have been on private tours.

From food tours, to river cruises and wine tasting, there’s plenty to keep you busy in the Slovakian capital! 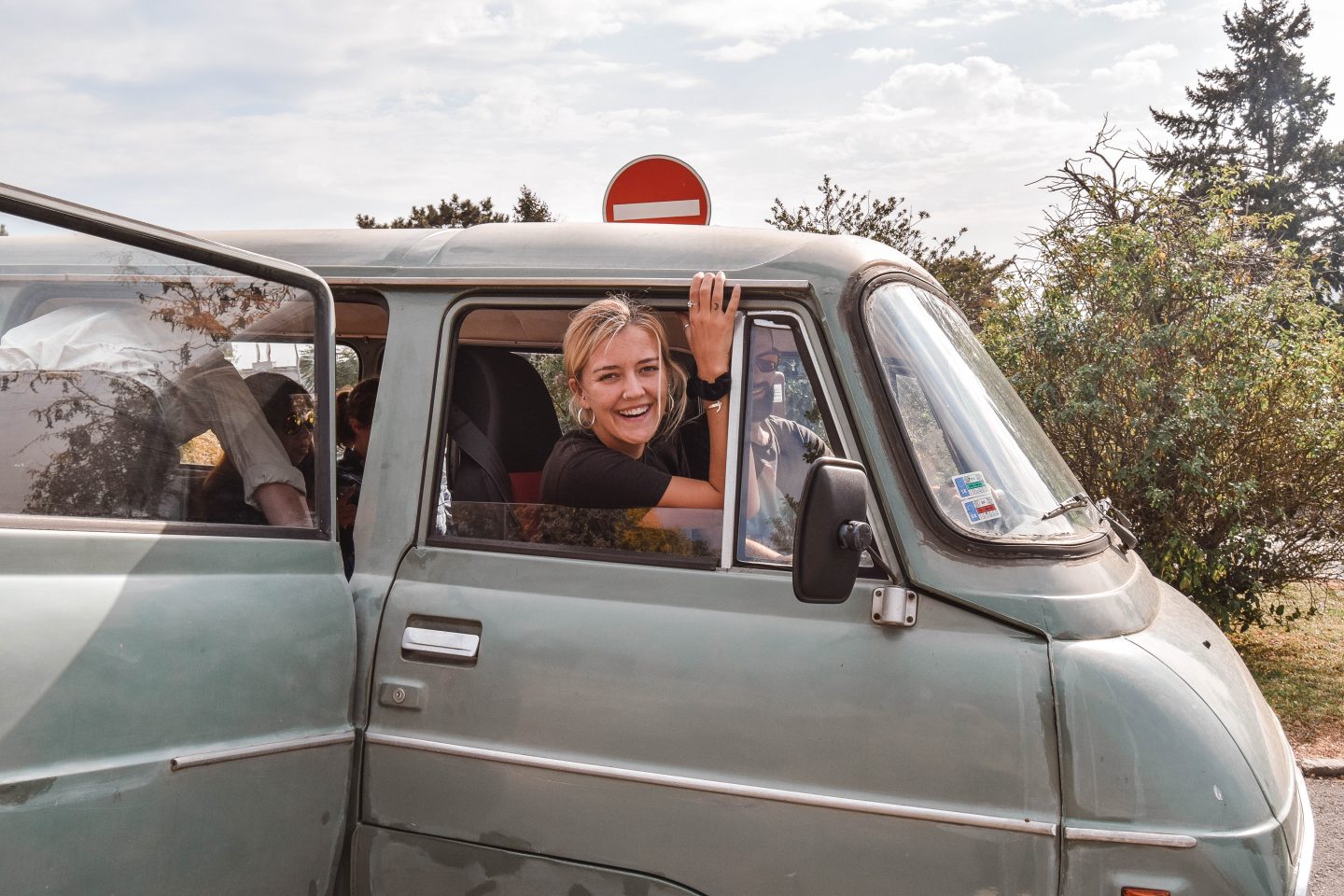 The number one spot on most peoples things to do in Bratislava in a weekend list, is without doubt the Old Town.

The town centre is a maze of historic buildings and quirky lanes. From museums to fountains, and plenty of pubs in between, you could spend hours walking around the small centre of the city.

The most noticeable building of them all though is the Old Town Hall. A complex of buildings, and not only the oldest city hall in the country but of one of the oldest stone buildings still standing in Bratislava!

The Old Town can be explored yourself by foot, however if you’re looking for a bit more info, you may want to check out the Bratislava: 1-Hour Small Group Walking Tour.

On this tour you’ll embark on a short but instructive walking tour of the most historical and important sites of Bratislava’s old city.

See the House of Opera, Old Town Hall, Michael’s Gate, and the unique St. Martin’s Cathedral with the help of an experienced local guide. 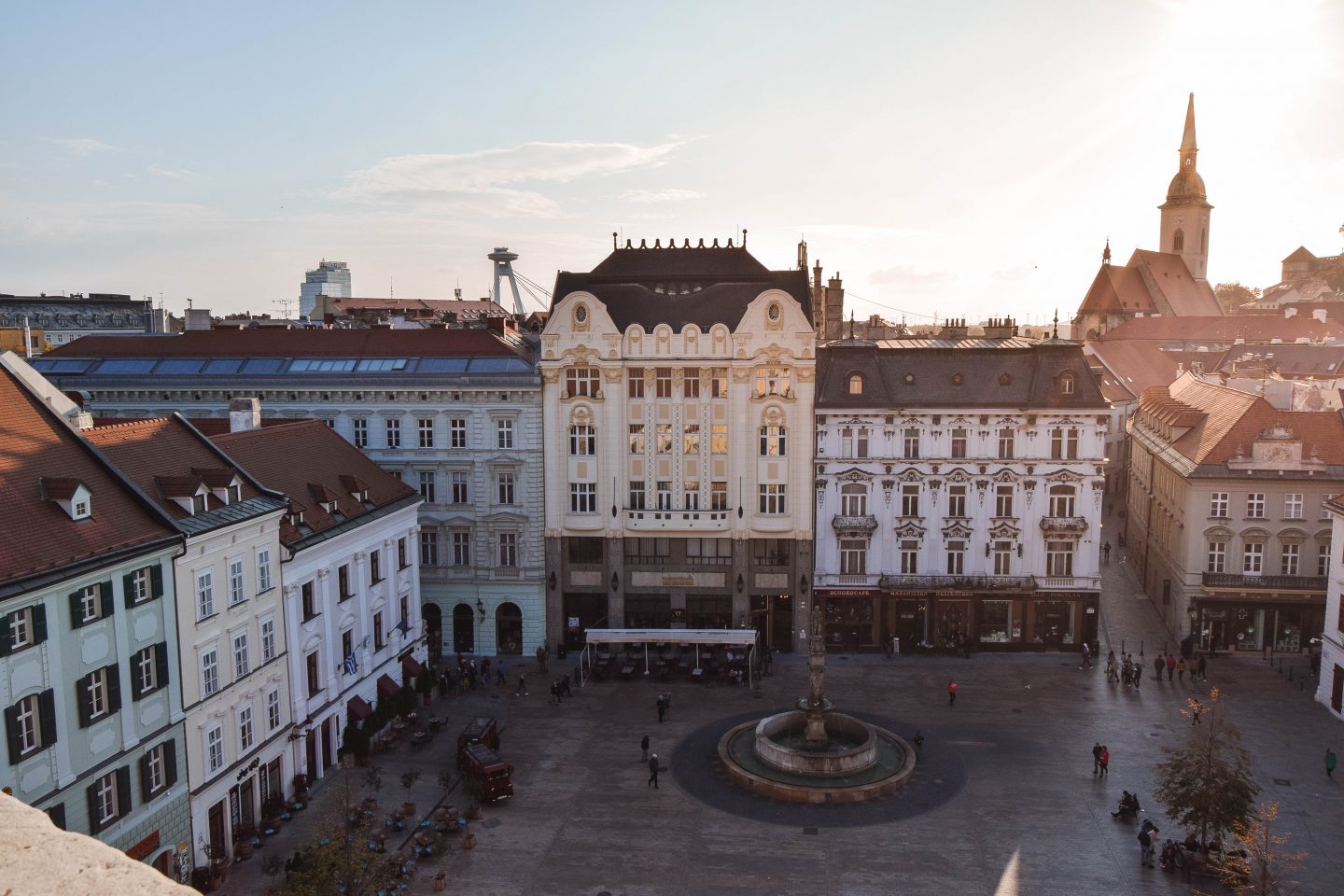 The view from the top of the Old Town Hall

Michael’s Gate is the only city gate that has been preserved of the four previous entrances to the city, and ranks among the oldest buildings in town.

In the medieval times, the town was surrounded by fortified walls, and entry and exit was only possible through one of the four heavily fortified gates.

Now, easily recognisable thanks to the statue of St. Michael and the Dragon sitting on top. the tower houses the Exhibition of Weapons of Bratislava City Museum. It also stands tall and proud in its white and green colours.

Michael’s Gate is one of the locations included on the Bratislava: 1-Hour Small Group Walking Tour, and it’s one of the iconic spots you won’t want to miss on your things to do in Bratislava in a weekend list. 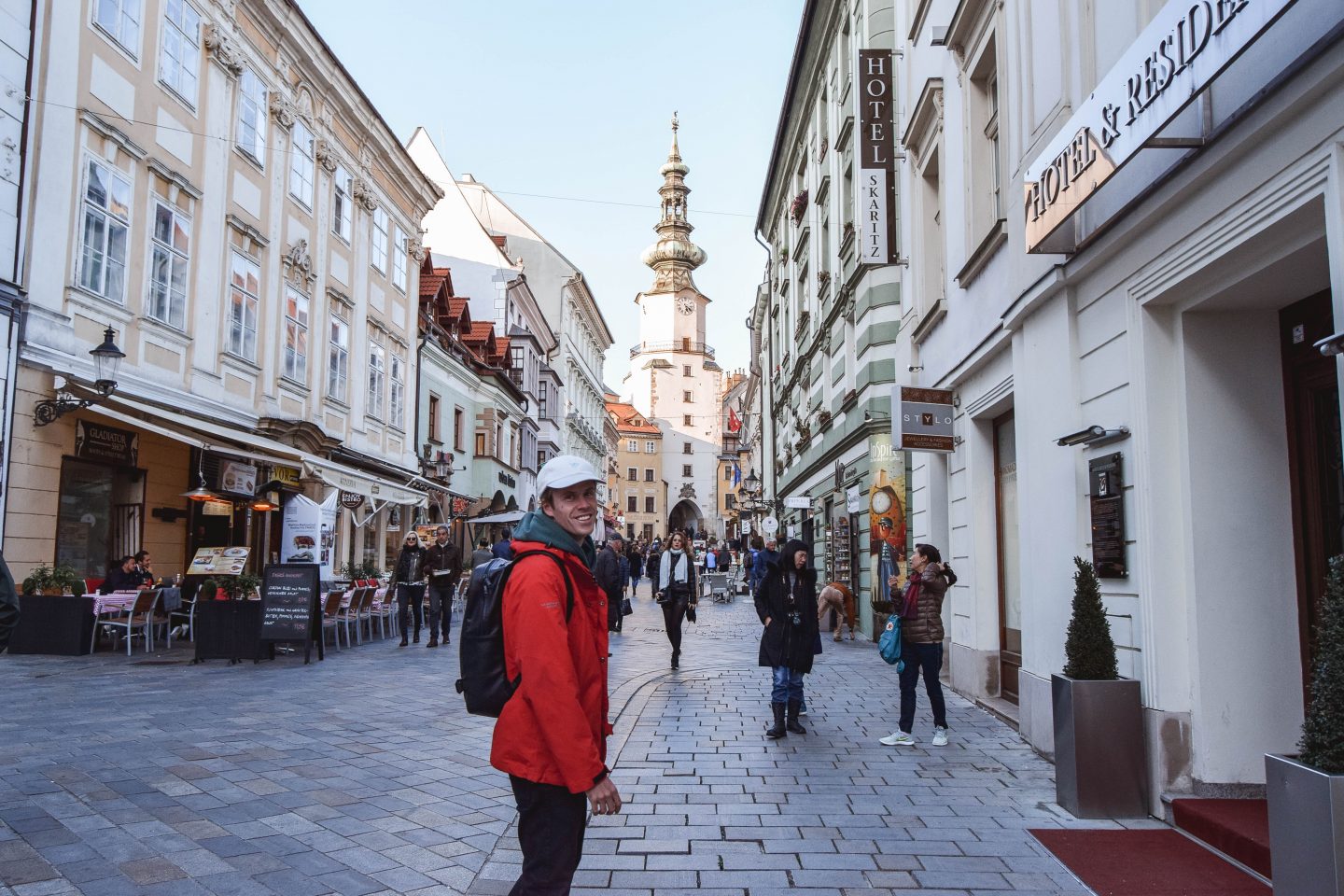 Charlie about to enter Michael’s Gate

We’ve seen many places of worship and religious shrines on our travels, although we both agreed that The Blue Church was our favourite to date.

You definitely don’t have to be religious to appreciate the work of art that is The Church of St. Elizabeth, aka the Blue Church.

Built in 1909, the pastel blue and white colours are just as beautiful on the inside as they are from the outside and attract many visitors of all nationalities daily. 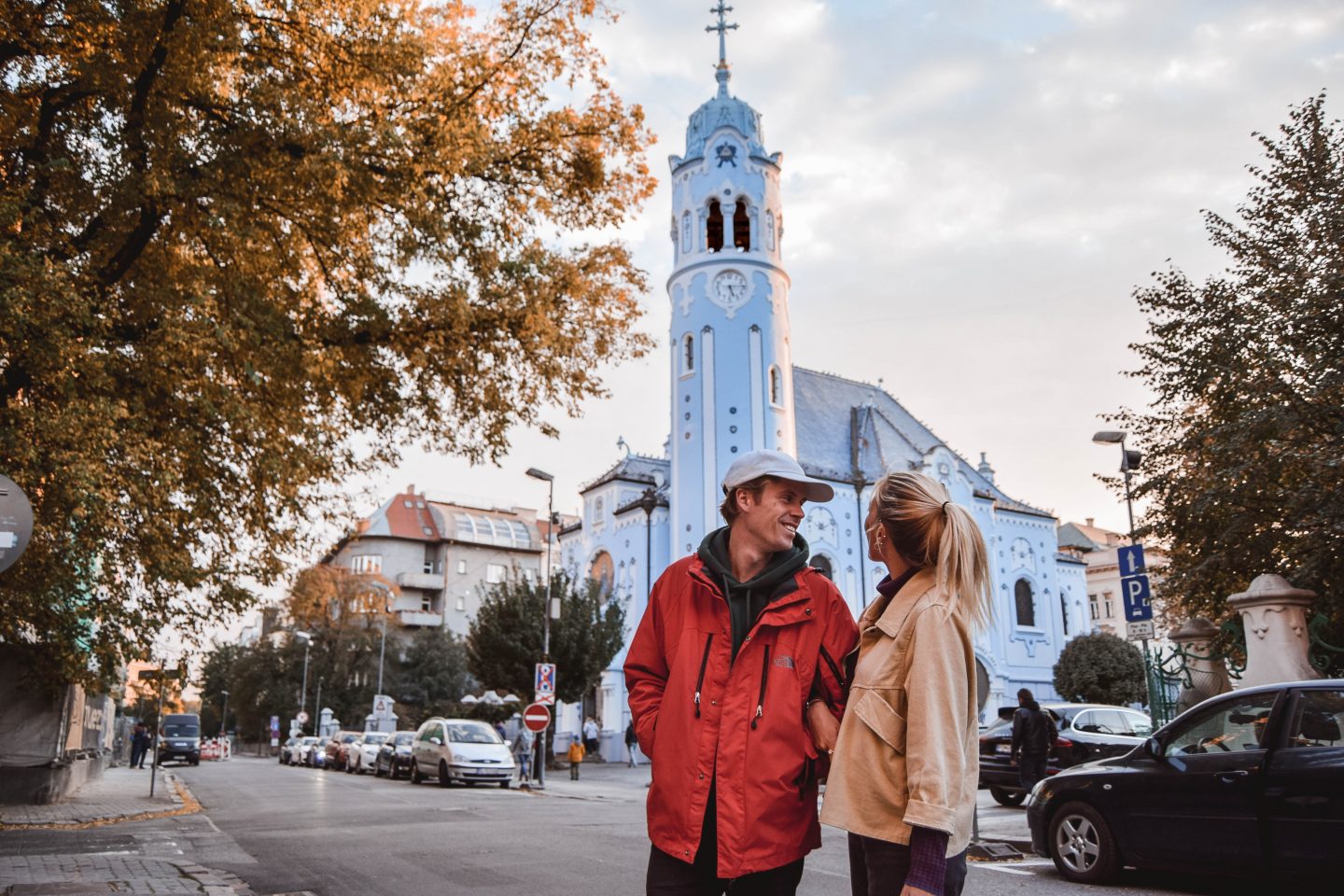 This small bronze statue of a sewer worker, also known as Cumil, has become somewhat the celebrity of Bratislava town.

Cumil translates to ‘peeper’ or ‘watcher’ in English and that’s exactly what you’ll see this guy doing if you spot him by your ankles.

There are rumours and tales as to what he’s actually doing down there, although locals believe that if you touch the mans head and make a wish it may well come true.

The man at work statue can be found at the corner of Laurinska and Panska streets. 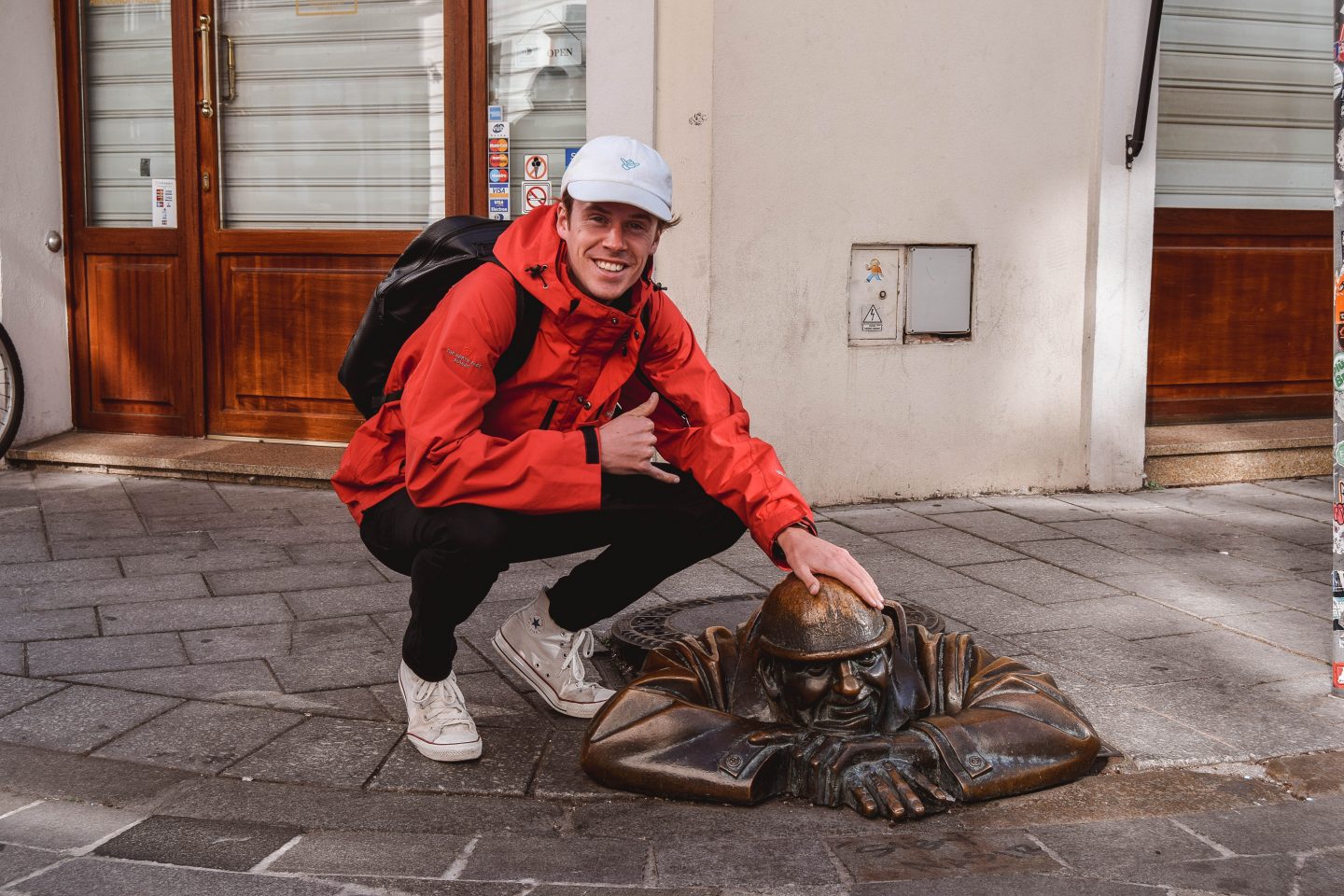 Charlie rubbing the head of the Man At Work

The Bratislava Castle is the main castle of Bratislava, and can be seen from pretty much from all over the city.

It stands directly above the Danube river, and gives great views over the capital, especially of the famous UFO Bridge.

If you just want to stroll past the Castle and catch a glimpse of the view, the Bratislava by Night Walking Tour & Drink at Observatory Bar is a great option.

The castle itself dates back to the 13th century and housed the crown jewels of Hungary, as well as many kings and queens throughout the ages.

However, for those looking to incorporate their castle visit with something else, there are a couple of good tours available:

Either way, a visit to the castle should be on your things to do in Bratislava in a weekend list, even if you just rest your legs and take in the views! 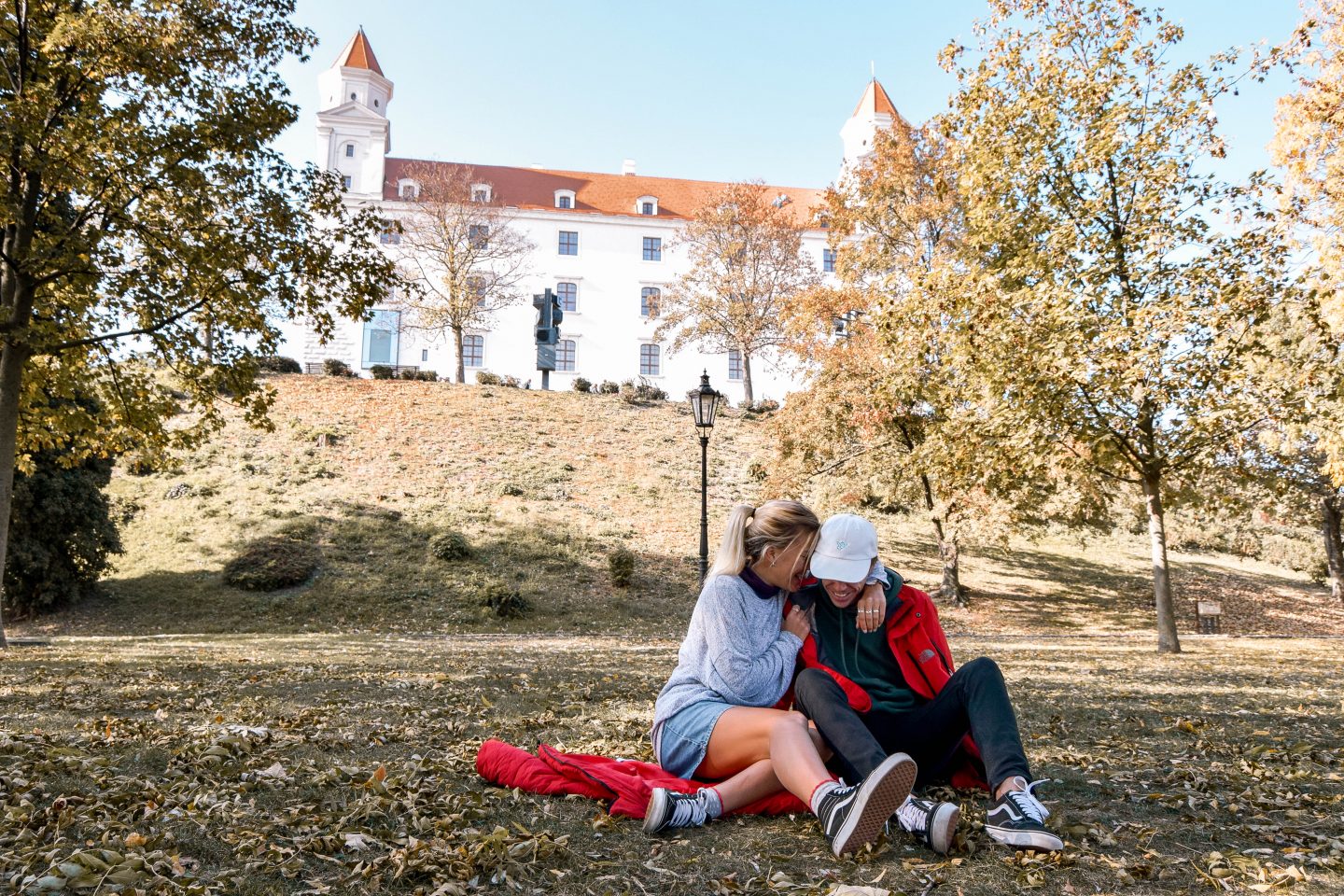 Having a rest within the grounds of Bratislava Castle

One of our highlights on our things to do in Bratislava in a weekend, was cruising around the city in retro Skoda’s.

The guys at Authentic Slovakia took us on a Post-Communist Bratislava Tour, showing us the off-the-beaten-track places of the communist past, as well as recent transformations in Bratislava.

The best part of it all though, was that we got to travel in an 8-seater Skoda 1203 van. There’s also the option of travelling in a 1970-1990s Skoda car, all whilst learning about 20th-century history from knowledgeable guides.

The 2 hour tour was an interesting trip into the locals lives of past and present. 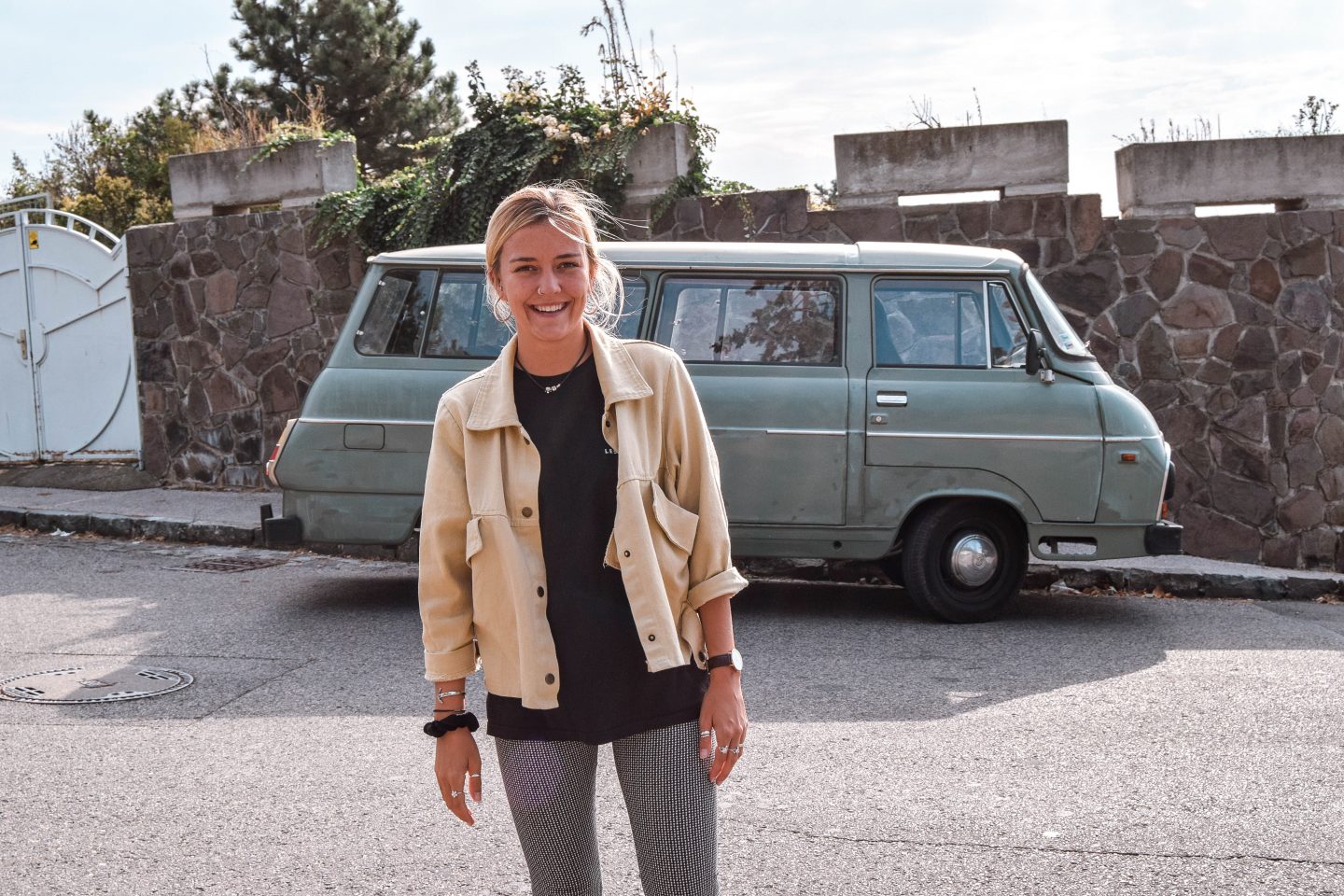 Lauren super happy with her ride for the day!

Slavin Memorial is the burial ground of thousands of Soviet Army soldiers who fell during World War II while taking over the city in 1945 from the occupying German units.

With a huge central monument, topped by a soldier stamping on the Swastika symbol, it’s certainly a talking point within Bratislava – but a highly respected one non the less.

A visit to Slavin is also included in the Bratislava: Soviet Era and Post-Communist Tour.

As with any memorial, it can be a dark place to visit, however the views overlooking the city are some of the best you can find!

Click HERE for our full Slavin Bratislava – A Memorial Worth Visiting blog. 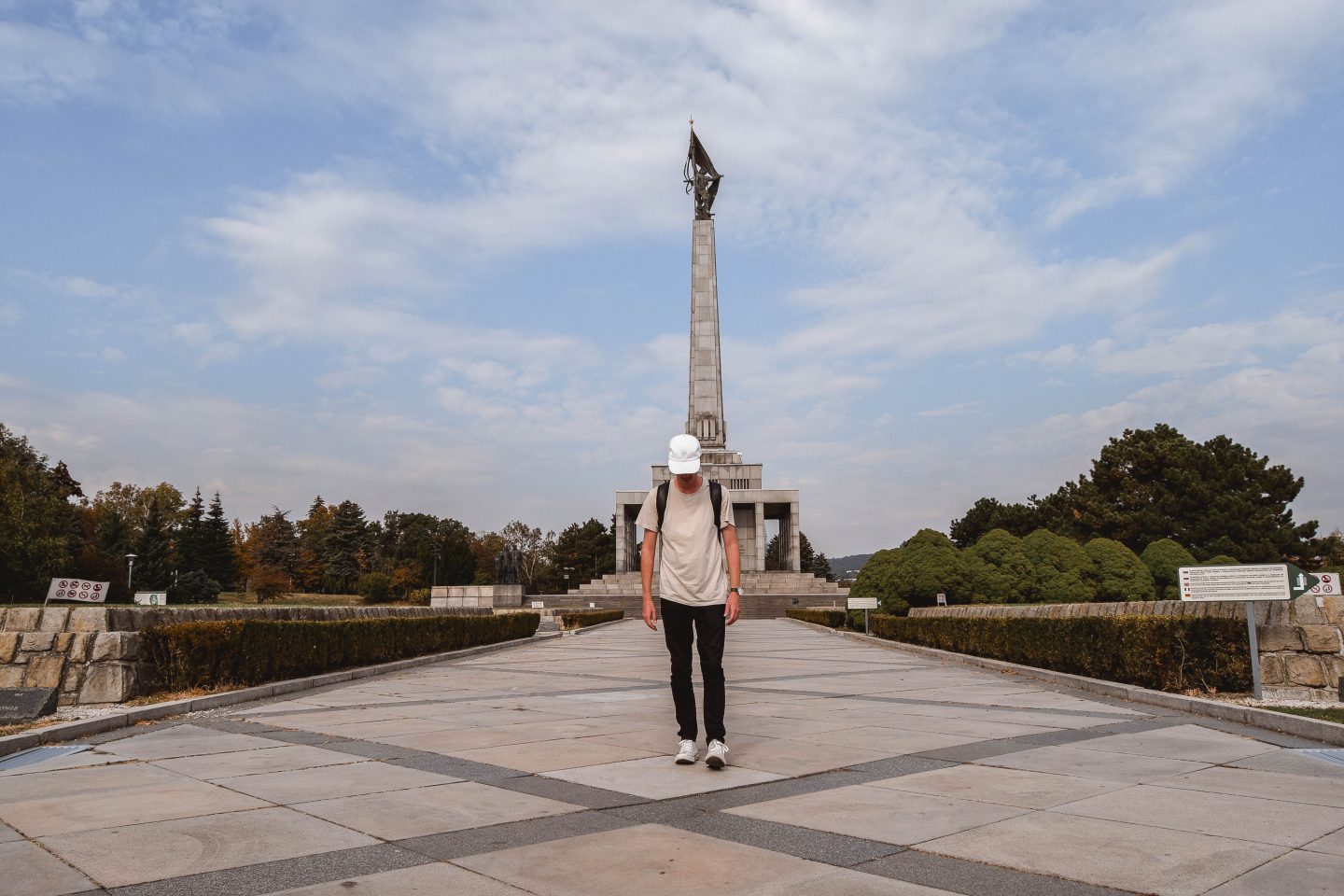 Most SNP, more commonly referred to as the UFO Bridge, is a road bridge connecting the capital of Slovakia over the Danube river.

It is also the world’s longest bridge to have just one pylon and one cable-stayed plane.

The most impressive part though is the huge UFO style observation deck that stands in the middle of it. With a restaurant also available to the public at the top of the 278ft pylon, it has become quite the hit with tourists since opening in 1972.

To access the UFO observation deck as a tourist you must pay €7.40 per person.

However, a great way to include it in your trip is by taking the Bratislava by Night Walking Tour & Drink at Observatory Bar.

This tour starts at 8pm, lasts roughly 2 hours, and includes important landmarks such as the Bratislava Castle, the Old Town, and the UFO Observation Deck.

For those looking for a more extreme experience of the UFO Bridge, why not check out the Skywalk Bratislava. Where you’ll take a unique walk on a windowsill of the observation tower 85-meters above Danube.

Click HERE for our full UFO Bratislava – The City’s Most Iconic Monument blog. 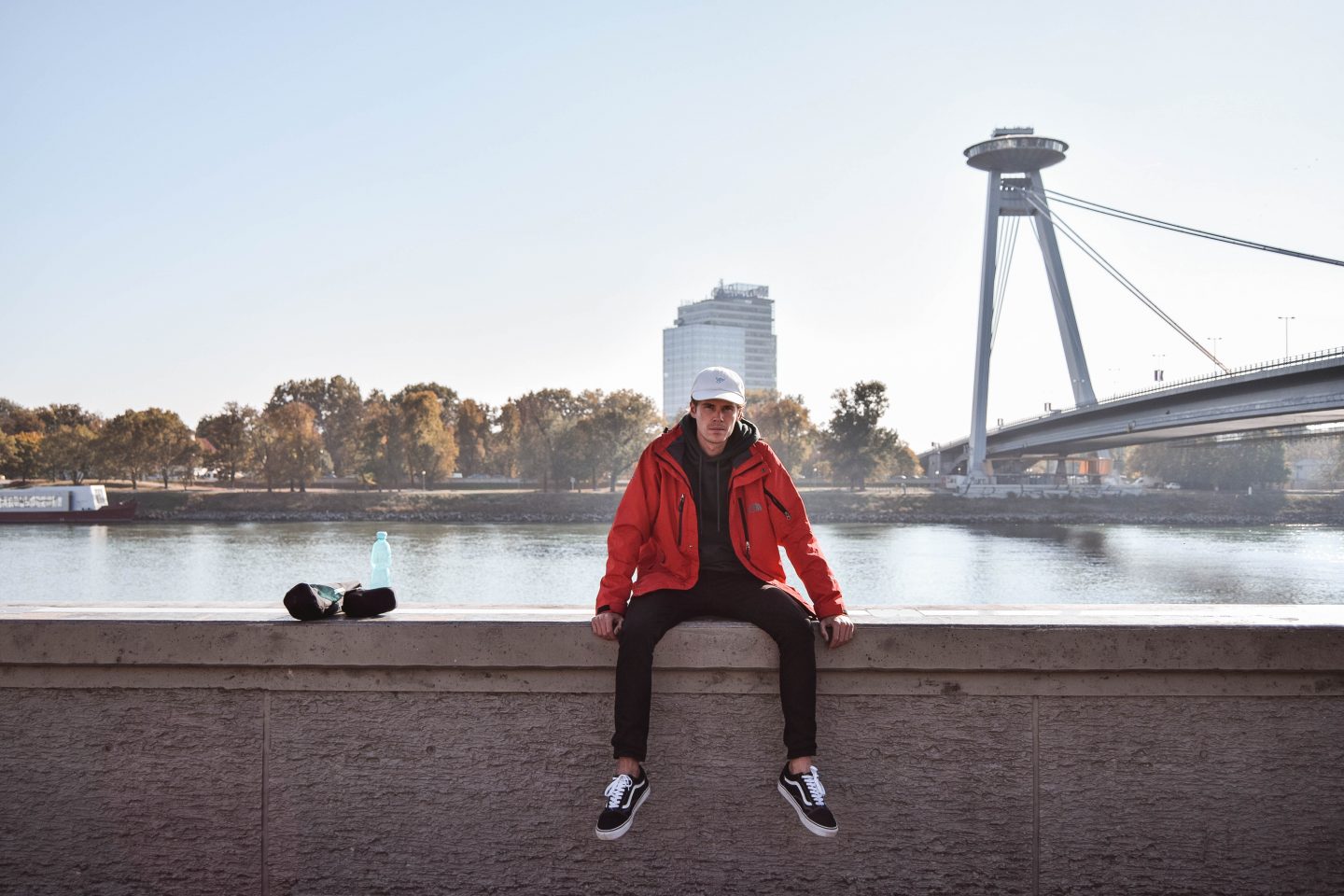 A viewpoint from the side of the UFO Bridge

Food and beer are one of the largest parts of Slovakian culture. So you’re going to want to get fully immersed amongst it.

With plenty of tours and taster sessions available, here are a few of the most popular:

As with most of our Europe blogs, we have to add eating local to things to do in Bratislava in a weekend.

We had lunch at Zylinder one afternoon which we can highly recommend for its “Bryndza” Dumplings!

A traditional Slovak potato dumplings with “Bryndza” sheep cheese and sour cream at only €7.90! That or the vegetarian Mushroom Ragu are amazing! 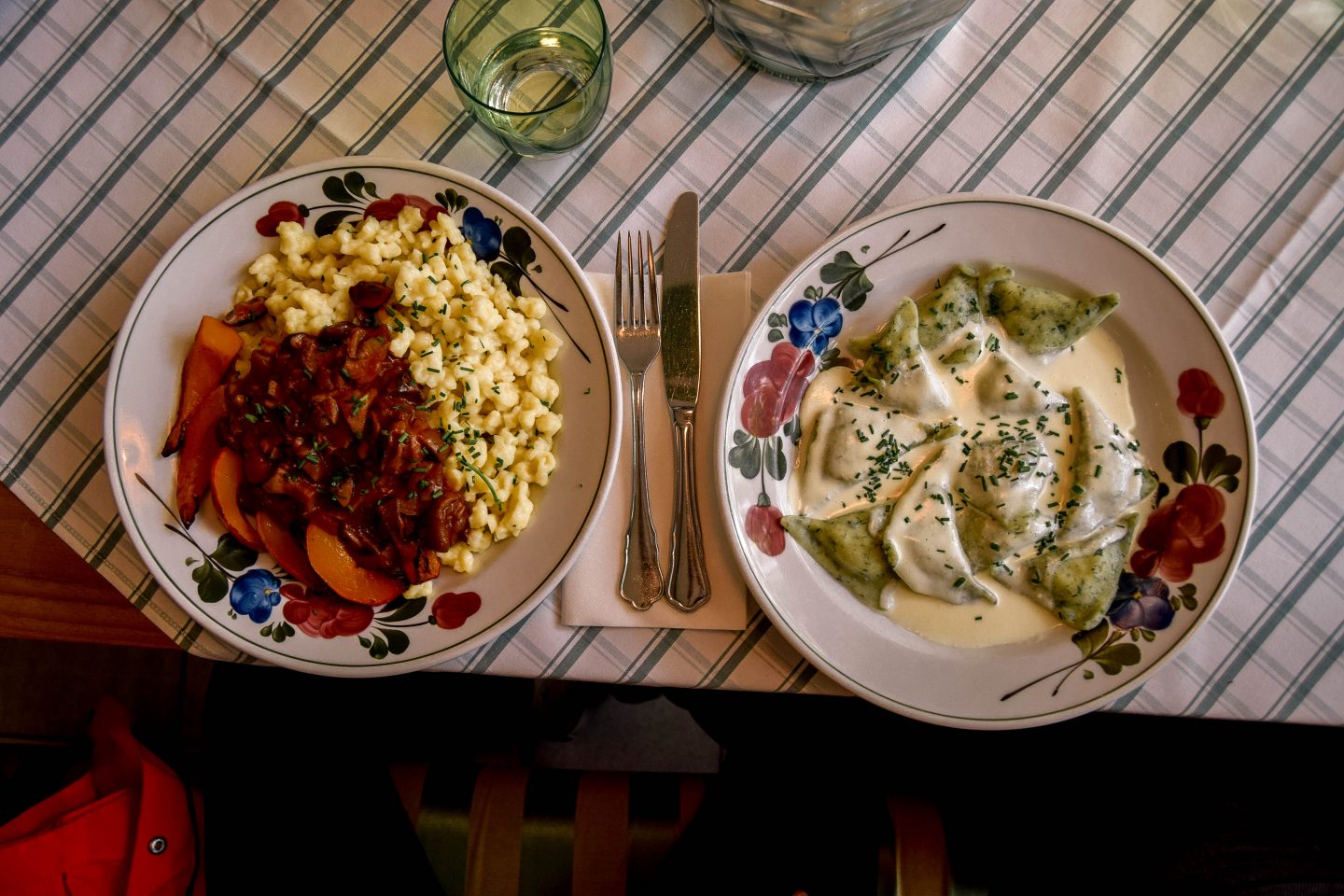 Getting stuck into the local delicacies.

One last thing that you must include at some point over your Bratislava trip, is to try the old Czech Slovakian rival to Coca Cola and Pepsi.

We’d heard rumours about Kofola not tasting so good, so of course we had to give it a go…and honestly, it wasn’t so bad!

You can pick up a bottle at any newsagents, and we guess it’s just one of things to do in Bratislava in a weekend that you have to check off. 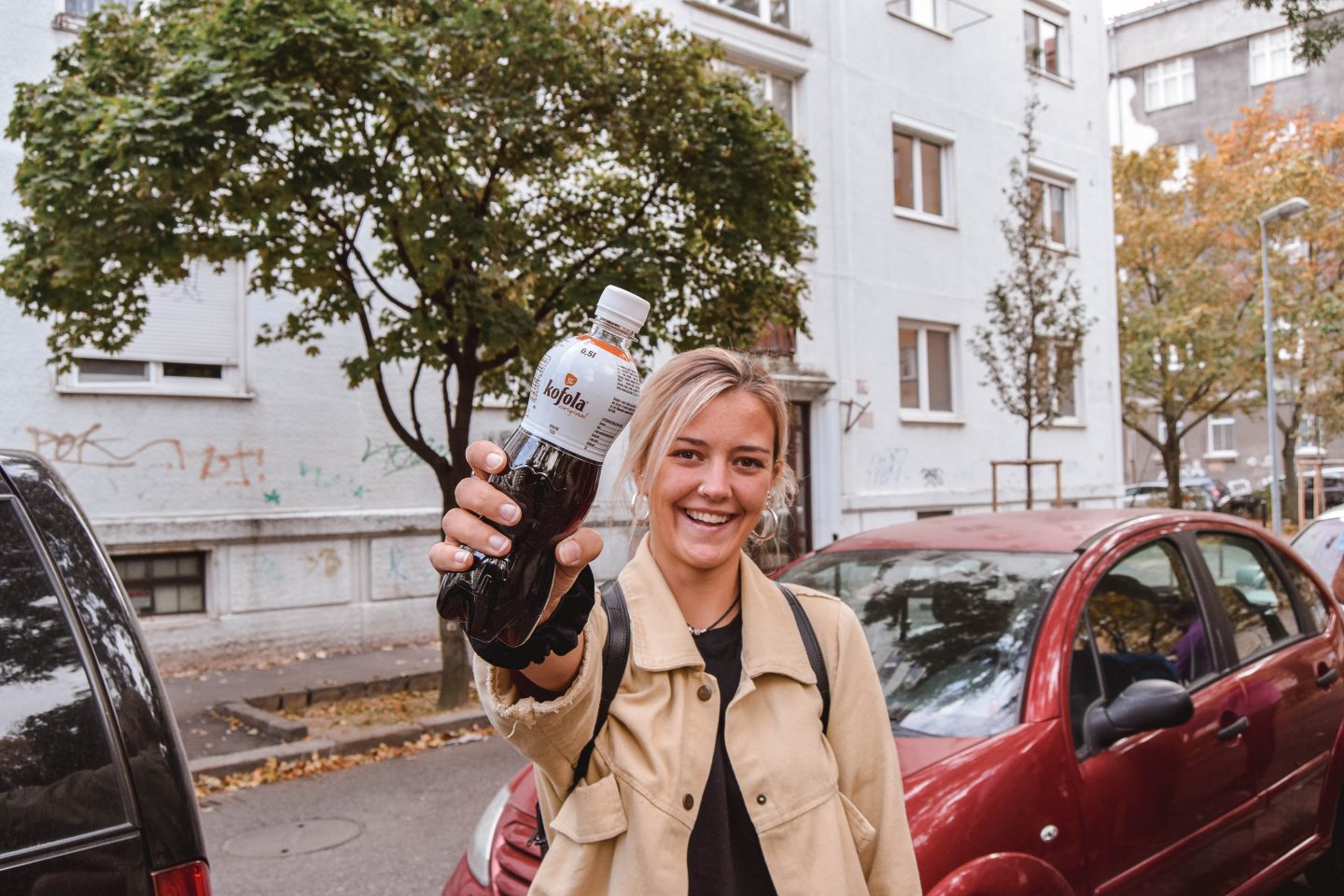 Of course you must try the Kofola!

Where To Stay In Bratislava

Luxury – Marrol’s Boutique Hotel – Marrol’s Boutique Hotel is 5-star hotel located in Bratislava city centre, within a walking distance to the historical Old Town. Parking is available in the underground garage with monitored camera system, WiFi is free of charge throughout the hotel. All 54 air-conditioned rooms in Marrol’s Boutique Hotel have been designed and equipped to offer the maximum comfort and create a perfectexperience whether you are travelling for business or leisure. All rooms and other hotel areas are strictly non-smoking. Free of charge facilities include coffee and tea making facilities, a SMART TV and a laptop-sized safety deposit box.

Mid-Budget – Austria Trend Hotel Bratislava – Situated on the edge of Bratislava’s pedestrianized Old Town, the Austria Trend Hotel Bratislava offers free wireless internet in all rooms and suites, a sauna and fitness facilities. Regional specialities and international cuisine are available in the restaurant. In the morning, you can start with a rich buffet breakfast and at noon, a light business lunch is available.

Budget – Hostel Bratislava by Freddie – Hostel Bratislava by Freddie is a budget hostel situated near Bratislava‘s main train station and only a 15-minute walk from the historical center.Free WiFi and laundry services are also provided. Dormitory rooms with different capacities feature safety lockers and shared bathroom facilities. Towels are available at a charge. All rooms include bed linen. There is also a common kitchen on each floor.

For more places to stay in Bratislava you can check the latest prices here.

The 12 Ultimate Madeira Things To Do

9 FUN Things To Do In Prague

6 Amazing Things To Do In Val Di Sole Trentino

You helping us to get to know about the charms.