Here’s a list of the top things to do in Odense. A beautiful city in Denmark that is bursting with history, culture and exciting culinary experiences.

Munke Mose Park is located directly in the central ring of the city.

The park is a huge green area offers a wide range of activities, playgrounds and nature trails. Surrounded by waterscapes and nature paths, the entire park is an excellent place for running, walking or biking.

There are also many open air events going on in Munke Mose Park throughout the year, as it’s an easily accessible area of Odense.

Whether you’re spending the day with your family or walking alone, the peaceful vibe really freshens your thoughts. It’s a great place to take a lunch break for those that work inside all day too. 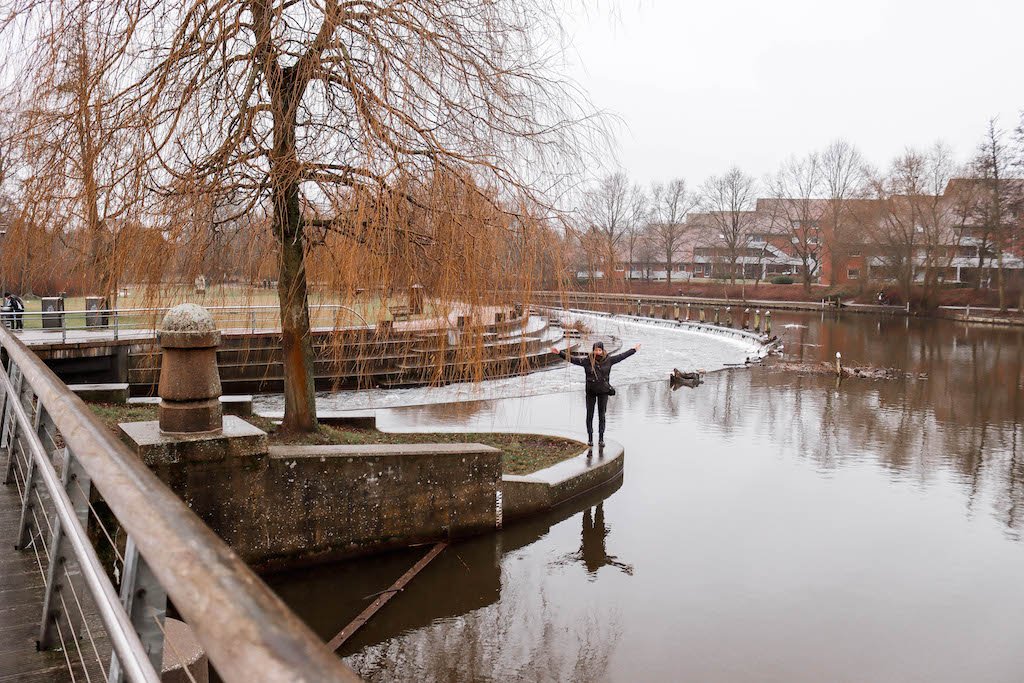 Exploring Munke Mose Park is definitely one of the top things to do in Odense – especially in summer!

Some of the city’s oldest houses are located within the Old Town’s neighbourhood.

The Old Town dates back to medieval times and is situated on the East side of the city centre.

It is a beautifully preserved part of Odense where the most powerful and influential citizens had their houses and businesses.

The old cobble stone streets, and colourful crooked houses are what attracts tourists because of it’s medieval feel. The wonky houses, and it’s fair share of well preserved buildings, give you a good idea about how life was in Odense during the Middle Ages. 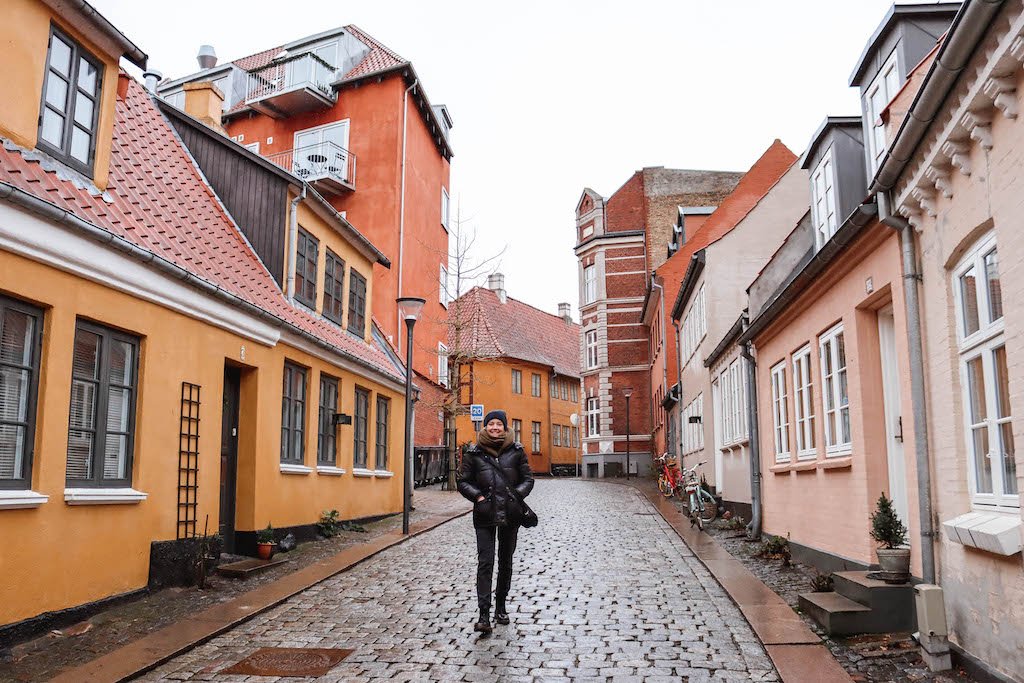 Hans Christian Andersen was poetry and fairy tale writer in the 19th century. He is best known for his fairy tales ‘The Little Mermaid’ and ’The Ugly Duckling’.

There is a little yellow house located on the corner of Hans Jensen’s Stared, where Hans Christian Andersen was born in 1805. At the time, this house was a one bedroom house in one of the old poor quarters of Odense, where he lived for just two years, from 1805-1807.

Today, the little yellow house is a museum and tells the story of his incredible life as a writer.

With his fairy tales being well known throughout most of the world and translated into more than 150 languages, it’s no surprise that this man is so highly glorified in Denmark. He was truly a literary legend.

As his birthplace was Odense, they certainly acknowledge him as the hometown hero by scattering many statues of him around the city. The traffic lights in Odense even have his face silhouetted within the lights.

In actual fact, it would be hard to find a town in Denmark which did not have a school, a street or a square which was named after him.

With the little yellow house opening in 1908 as a museum, this makes it one of the oldest poet museums in the world.

Tickets at the Hans Christian Andersen Museum 150 meters down the street.

(There is also Little Mermaid Statue in Copenhagen Harbour and it is the most visited site in all of Denmark).

This is certainly one of the top things to do in Odense. 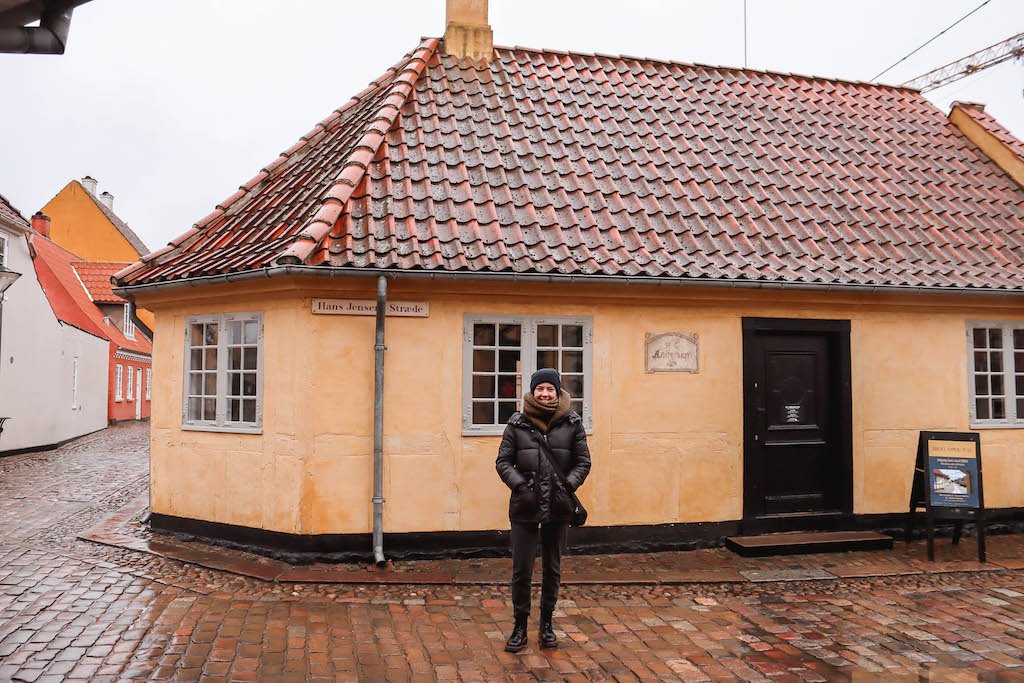 One of the top things to do in Odense without a doubt!

Before Hans Christian Andersen became famous for his incredible style of writing, some people saved some of the things he did, as a keepsake.

For those that are really interested in his story, there’s an opportunity to see those special memento’s up close at the newly opened museum. It’s also super close to the little yellow house that he was born in down Hans Jensen’s Stared.

The museum contains a unique collection of memorabilia linked to Hans Christian Andersen of more than 32,000 items. You will find pieces that represent his entire life and life’s work.

Along with the Hans Christian Andersen’s house, this is also one of the top things to do in Odense.

If you love H.C. Andersen and his way of words, definitely check out the museum too

5. Eat At A Street Food Court

The two main street food courts that we know of are Arkaden Food Market and Storms Pakhus.

Arkaden consists 21 stalls, a wine bar, a beer bar and a coffee shop, serving over 2,000 people every day.

Authentic homemade food is served from around the world to everyone, whether you are picky, vegetarian or have specific dietary requirements. You will find anything you fancy from sweet, strong or bitter food.

To have an idea, they serve anything from fried chicken, sushi, fresh spring rolls or Moroccan street food and thai curries.

A beautiful old warehouse that has turned street food and more, with 16 different food stalls, bars and creative stalls.

Not only do they have appetising food stalls and refreshing bars, but it’s also a creative hub for the those looking to hang out and work.

You’ll find creative workshops with everything from crafts to their very own hairdresser and barber shop, and you can also check out the street wear made from upcycled material in Storms Pakhus too. 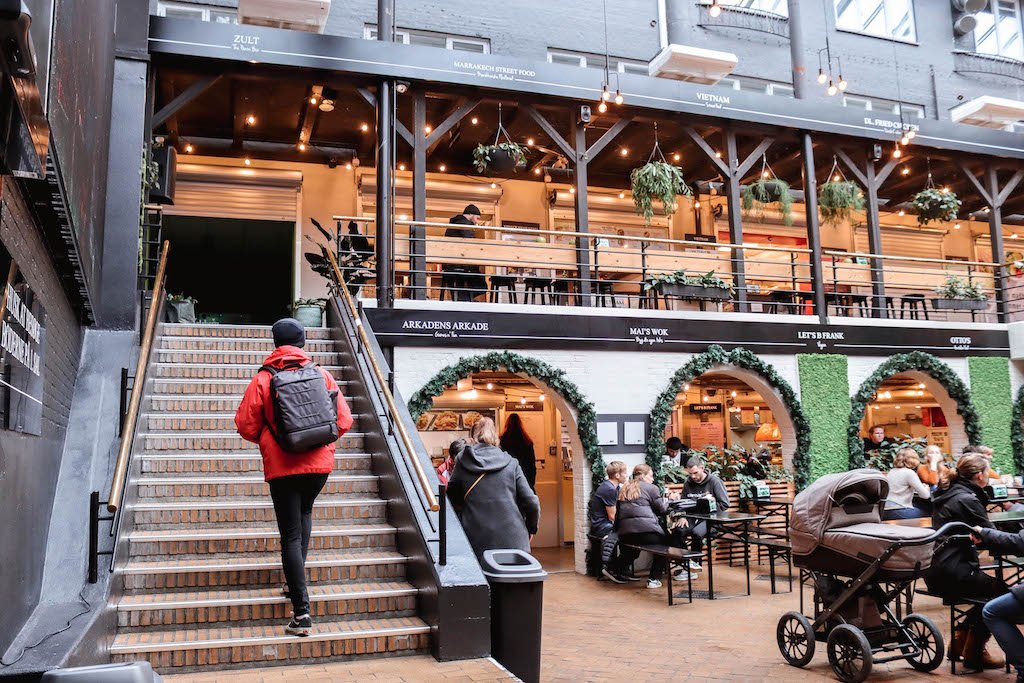 We had the opportunity to stay with friends whilst visiting this beautiful city, so we kind of had the down low on the best things to do in Odense when it rained.

Although going to a flea market may not be on the top of your list of things to do in Odense, we absolutely loved it and highly recommend checking one out.

We always like the to pick up small things from each place we visit, and a flea market is the perfect place to do just that.

Some flea markets may only be around for limited time only, so keep a look out for the latest news through Odense Facebook events.

A few we can recommend are: The Red Factory, Veras Market Odense and Take Now. 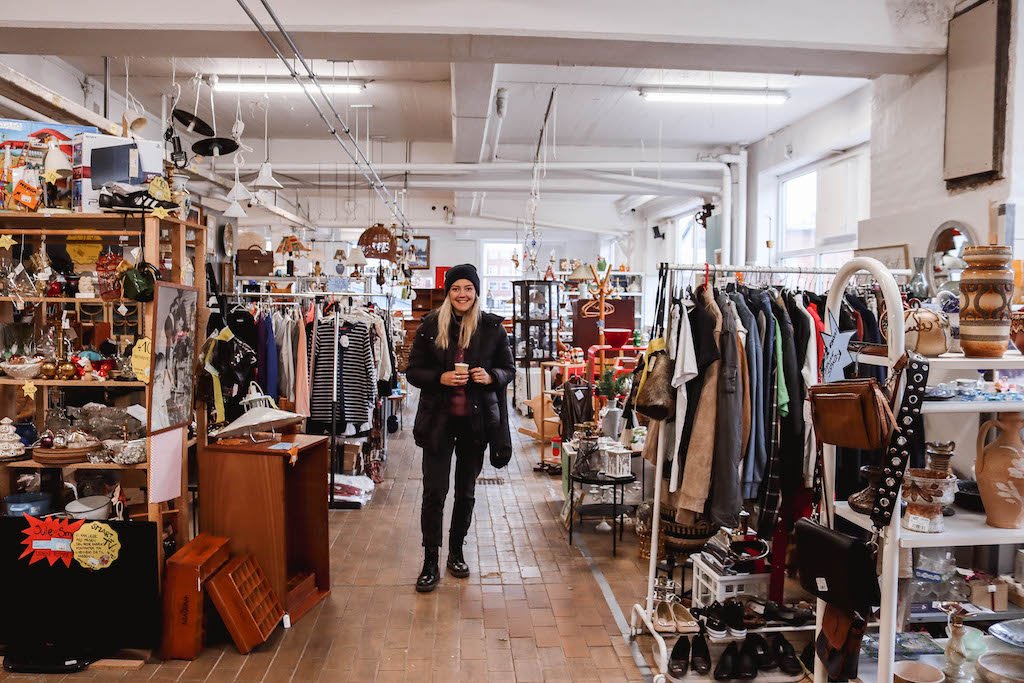 So we happened to come across a bar of chocolate in a local whilst shopping in Odense, and noticed the town’s name on it!

After doing a bit of research, we found out that Odense Marcipan is in fact a world leading manufacturer of marzipan and marzipan-related products.

Founded in 1909 by the Thobo-Carlsen brothers, they focused their efforts on producing marzipan of the very best quality. Fast forward 100 years and Odense Marcipan manufactures over 170 different types of marzipan!

The company’s range of products has naturally expanded over time, and a few of the customer favourites include nougat, chocolate and dessert sauces.

The company is represented on all markets where marzipan is used, and ODENSE is the largest brand in the Scandinavian countries.

With it’s headquarters still located in Odense, be sure to grab a bar of home grown talent whilst in the town. 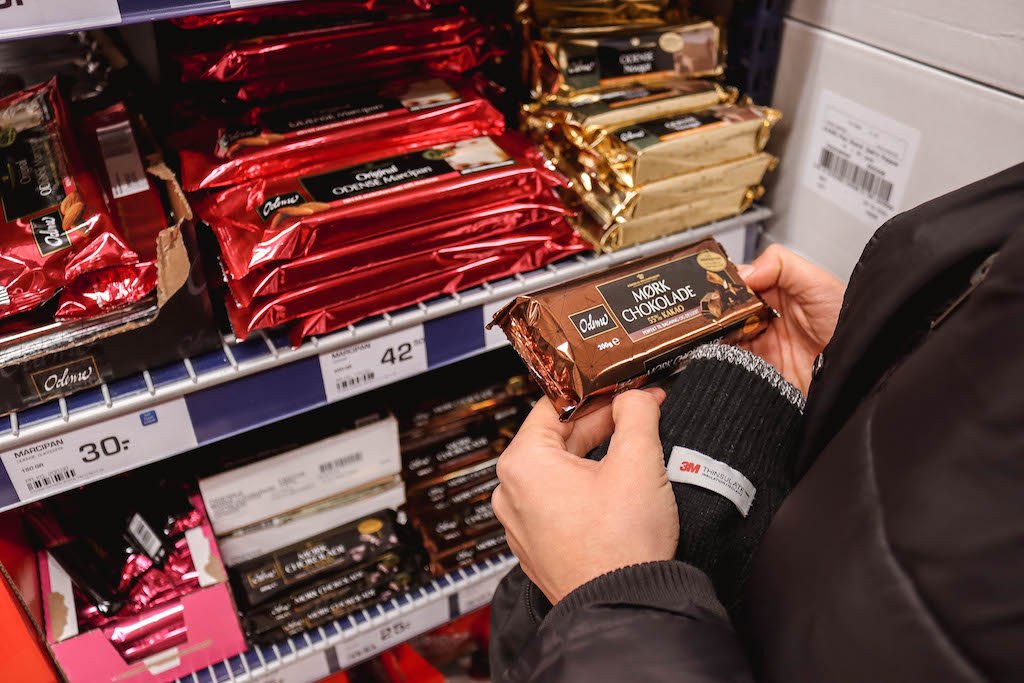 Danish pastry – where do we start?!

With so many different shapes and names to choose from, we recommend grabbing a small selection from a local bakery! You can of course find them in the supermarket chains, but since you’re in Denmark, you should really try and get the ‘real deal’.

Some pastries have chocolate, sugar, cinnamon or icing on top. Other pastries may have different flavoured jams, marmalades or other preserves inside.

The concept was originally brought to Denmark by Austrian bakers, although has since developed into a Danish specialty.

A danish pastry will go down a treat with a hot cup of cocoa or coffee, so be sure to add it to your list of things to do in Odense. 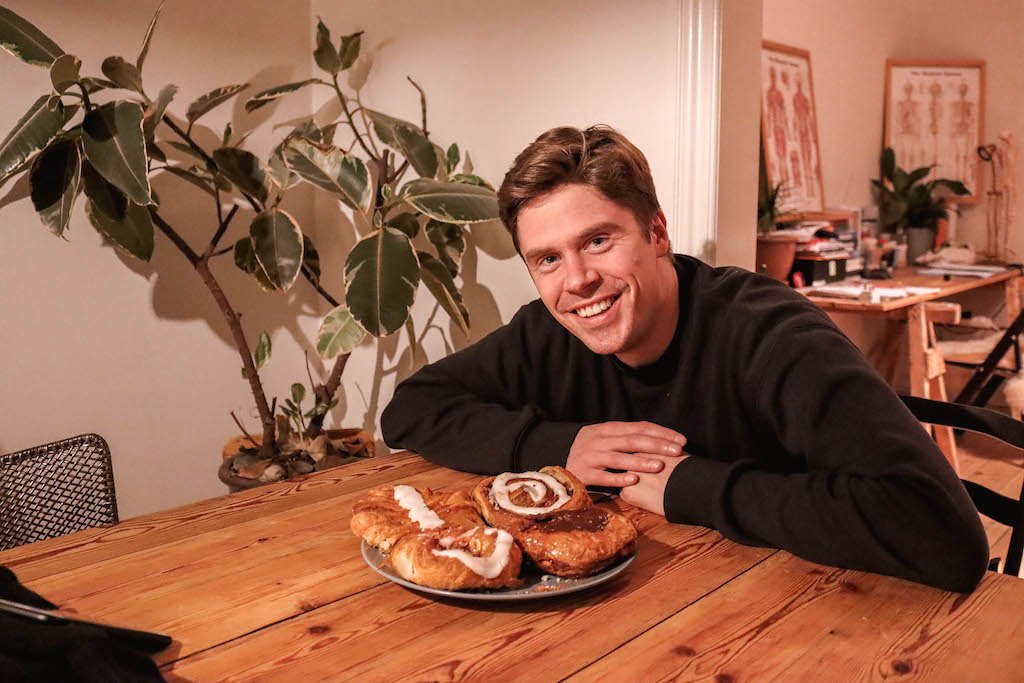 Of all the top things to do in Odense, you cannot leave without trying a Danish pastry!

There are several sights and attractions in the town of Odense including many quality museums and galleries, pedestrian streets, good restaurants, as well as several interesting churches.

Odense is a town that is easily accessible on foot. However, you can also rent bicycles or scooters to make things quicker.

The Danish are well known for using bicycles to get from A to B. So it’s a great option for those who want to ride their way through the city.

In fact, bikes are taken into consideration just as much as cars. So you’ll find bike lanes almost everywhere you choose to explore.

All the tops things to do in Odense are also easily accessible by bike! 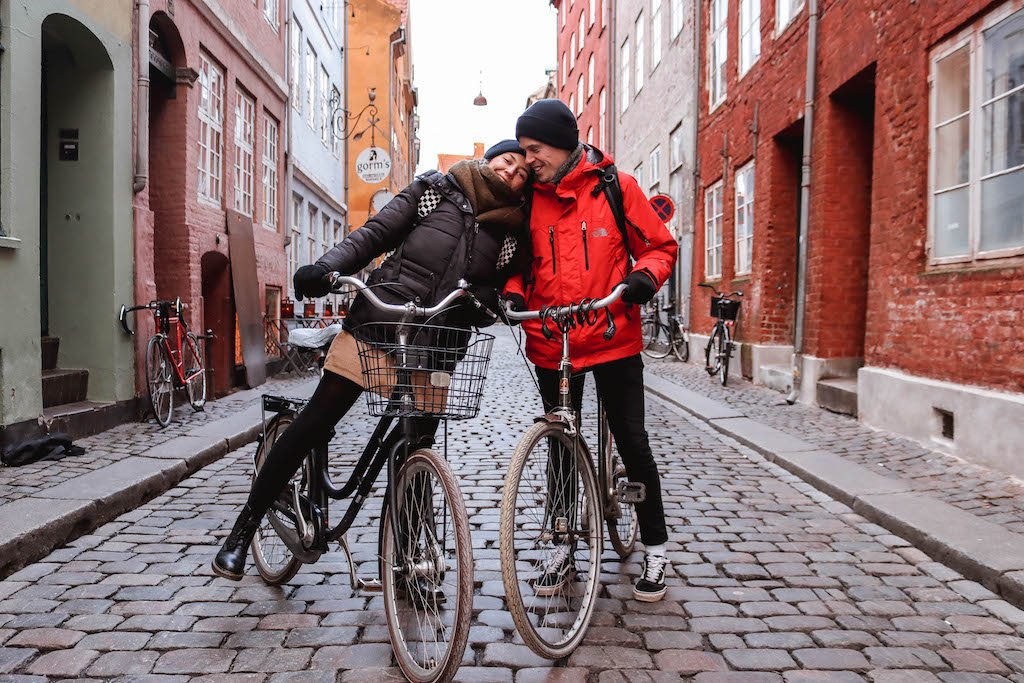 Odense is very bicycle friendly. Not only that, it’s a great way to see as much of the city as possible.

Where To Stay In Odense

Luxury – Hotel Odeon – Hotel Odeon is located in Odense just 200 yards from Odense train station. Featuring a 24-hour front desk, this property also provides guests with a restaurant. The accommodations offers a business center and free WiFi. Guest rooms in the hotel come with a private bathroom, flat screen TV as well as a hair dryer. Hotel Odeon rooms also include air conditioning and a desk. The daily breakfast offers continental and buffet options. Odense Concert Hall and H. C  Andersen’s House are only 450 yards from the property.

Mid-Budget – H.C. Andersen Hotel – H. C. Andersen Hotel is located just 500 yards from the centre. The accommodation has a restaurant, bar, fitness cnetr, and a shared lounge. There is a 24-hour front desk as well as a casino. Free WiFi is available and private parking is also available at an extra charge. Guests at the hotel can enjoy a buffet breakfast too. You can play pool, ping pong and darts at H. C. Andersen Hotel, and bike rental is available. Popular points of interest near the accommodation include Carl Nielsen Museum, Odense Concert Hall and Hans Christian Andersens Hus.

For more places to stay in Odense you can check the latest prices here.

4 Day London Itinerary – Where To Go In London?