The UFO Bratislava, is the number one spot to get that prime view of the city from. So here’s all you need to know about visiting this modern piece of art.

How To Get To UFO Bratislava

The UFO Bratislava is located just a little outside of the main city centre, hovering over Most SNP bridge.

It’s around a 20 minute walk from the Old Town, although it’s probably easier to take public transport.

The best option is to buy a Bratislava Card, which allows unlimited use of all public transport for 24, 48 or 72 hours in the Bratislava Region.

The Bratislava Card also gives free access to 14 museums and galleries in Bratislava, plus more than 100 discounts of up to 50% on attractions, restaurants, shops, and leisure activities, the UFO being one of them!

Click HERE for our full 10 Best Things To Do In Bratislava In A Weekend – Ultimate List blog.

To access the UFO observation deck you must pay €7.40 per person. If you eat at the restaurant, the €7.40 is then deducted from your food or drink bill.

However, a great way to include it in your trip is by taking the Bratislava by Night Walking Tour & Drink at Observatory Bar.

This tour starts at 8pm, lasts roughly 2 hours, and includes important landmarks such as the Bratislava Castle, the Old Town, and the UFO Observation Deck.

For those looking for a more extreme experience of the UFO, why not check out the Skywalk Bratislava. Where you’ll take a unique walk on a windowsill of the observation tower 85-meters above Danube.

The UFO is open daily for visitors. 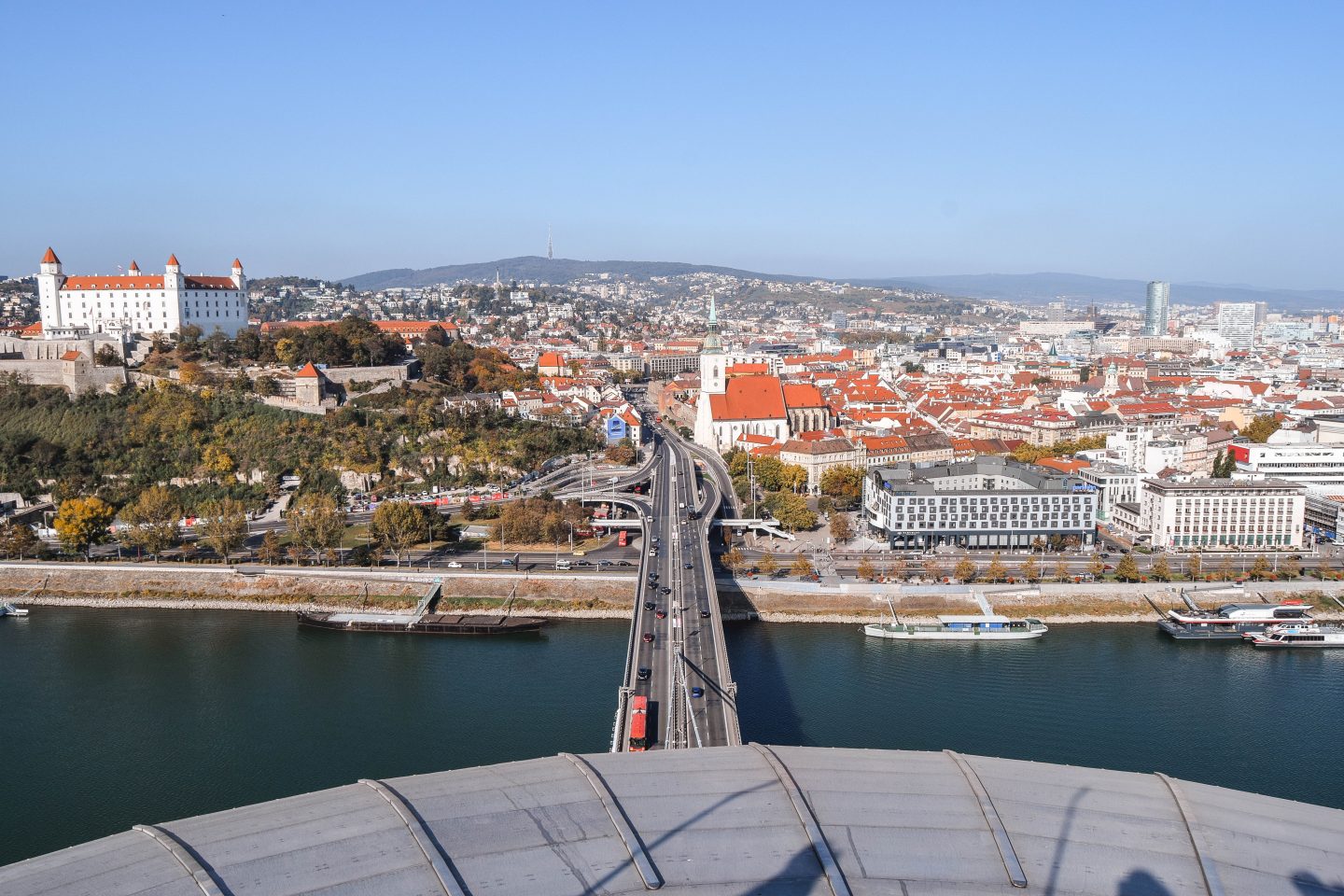 The view from the Observation Deck of UFO Bratislava

History Of The Most SNP Bridge

It officially opened on 26th August 1972, as the second bridge running over the Danube River in Bratislava.

Since it’s construction in 1972, the bridge was named Most SNP (Bridge of the Slovak National Uprising). However, the locals simply referred to it as the ‘New Bridge’.

Because of this, in 1993 the name was changed by the Bratislava City Council to Novy Most (New Bridge). This was to give it a name that was predominantly chosen by the people.

However, on 29th March 2012, the members of the Bratislava City Council voted in favour of an initiative by the Mayor of Old Town Táňa Rosová to change the bridge’s name back to Most SNP. This became effective 29th August 2012.

Prime views of the Bratislava Castle from the observation deck

What To Expect At The UFO Bratislava

With the UFO Bridge being the highest point in the city, you can only imagine the insane views from the top.

The observation deck and restaurant offers insane panoramic views of Bratislava. To get to the top, you have to use the lift that goes up inside the eastern pillar. You can access the entrance to the lift via the walking and cycling paths on each side of the bridge.

Once the lift has taken you to the top (which takes around 30 seconds), you will come out onto the reception where someone will direct you through to either the observation deck or the restaurant.

There are binoculars that you can use for free at the tops with views reaching up to 100km away.

In the west pillar, there is access to an emergency staircase with a whopping 430 stairs. 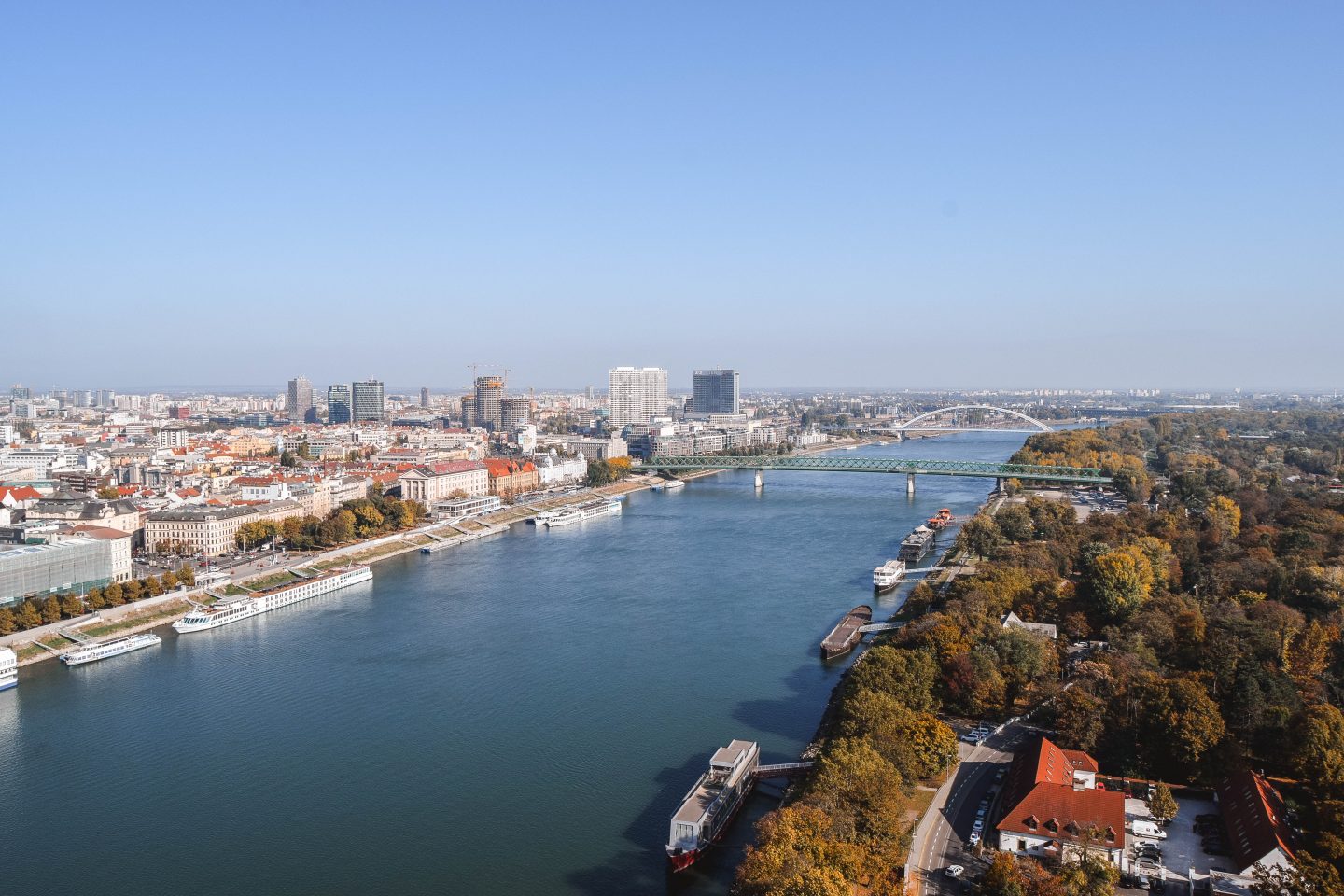 Sitting right above the Danube river 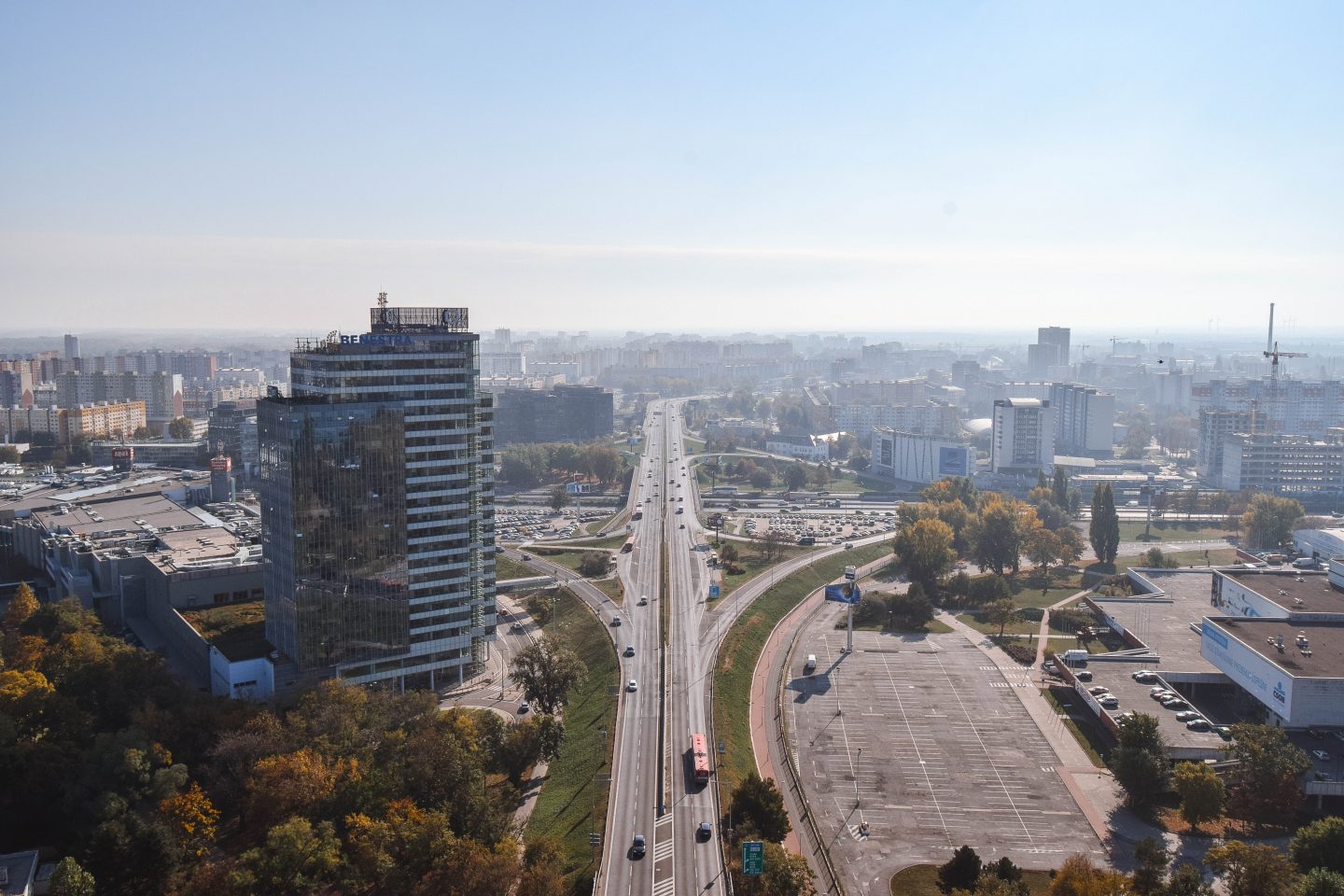 The views from the other side of the UFO Bratislava

Because of limited time and other special things planned for the city, we didn’t get chance to visit the restaurant. Although, we’ve heard all good things and it was awarded as best restaurant of the year in 2011.

The special attraction of the UFO Bratislava is the flying saucer shaped structure that sits on top of the bridge at 278 ft high. Within this peculiar shaped structure, there is an observation deck and a restaurant.

The restaurant serves both traditional Slovak and international cuisine. They combine the two and call it Mediterasian.

Access to the UFO Bratislava Restaurant costs €7.40. However, the fee is then taken off the bill if you choose to dine in the restaurant.

The riverbank on the other side of the UFO Bratislava is very popular because it’s an open space and great for afternoon strolls. It attracts the romantic walkers, joggers, cyclers and even the fair few that prefer to sit and watch the world go by on a bench.

If you decide against taking a trip to the UFO Bratislava, then you’re pretty much guaranteed a glimpse at the futuristic-style architecture from any part of the city. 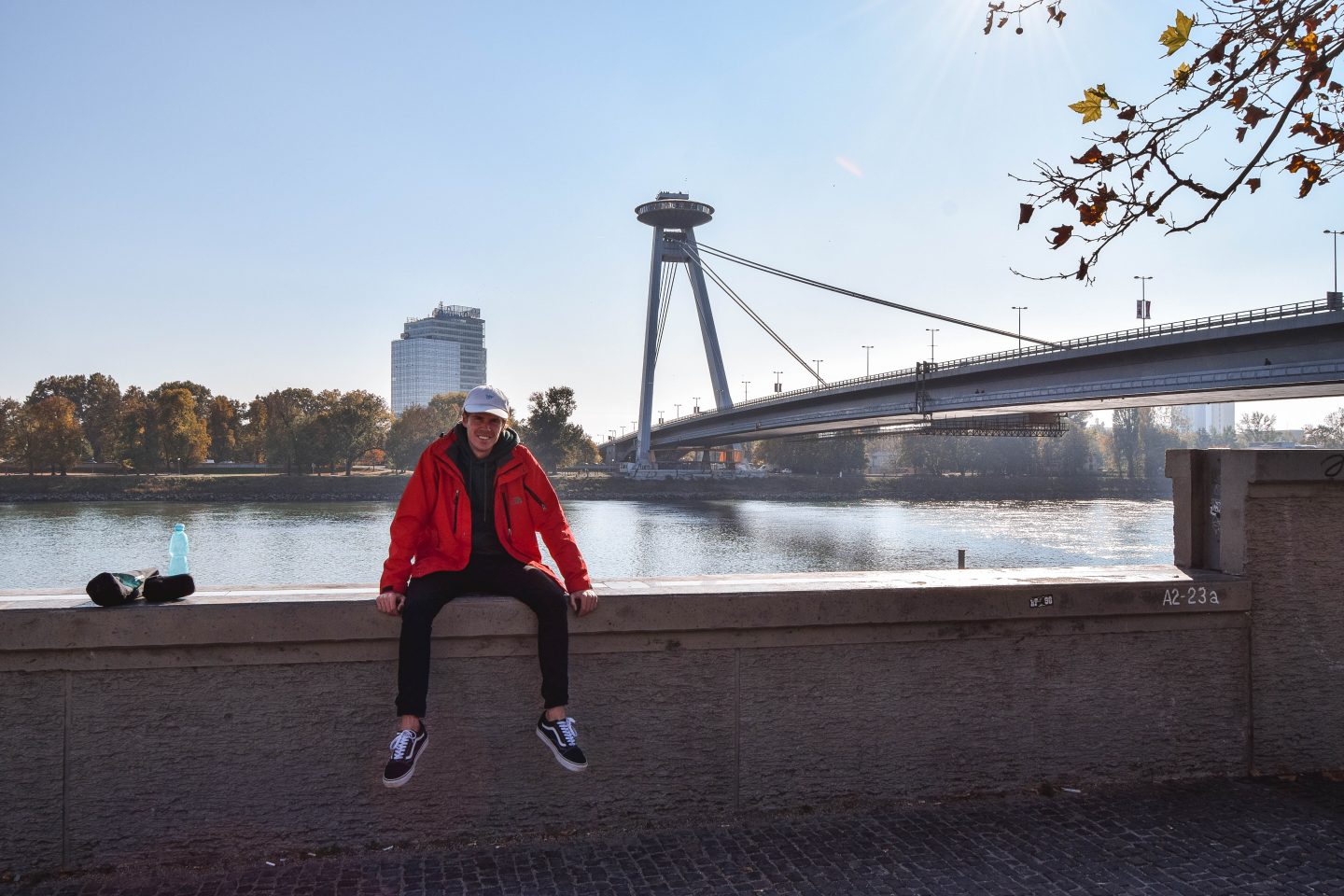 Where To Stay In Bratislava

Luxury – Marrol’s Boutique Hotel – Marrol’s Boutique Hotel is 5-star hotel located in Bratislava city centre, within a walking distance to the historical Old Town. Parking is available in the underground garage with monitored camera system, WiFi is free of charge throughout the hotel. All 54 air-conditioned rooms in Marrol’s Boutique Hotel have been designed and equipped to offer the maximum comfort and create a perfectexperience whether you are travelling for business or leisure. All rooms and other hotel areas are strictly non-smoking. Free of charge facilities include coffee and tea making facilities, a SMART TV and a laptop-sized safety deposit box.

Mid-Budget – Austria Trend Hotel Bratislava – Situated on the edge of Bratislava’s pedestrianized Old Town, the Austria Trend Hotel Bratislava offers free wireless internet in all rooms and suites, a sauna and fitness facilities. Regional specialities and international cuisine are available in the restaurant. In the morning, you can start with a rich buffet breakfast and at noon, a light business lunch is available.

Budget – Hostel Bratislava by Freddie – Hostel Bratislava by Freddie is a budget hostel situated near Bratislava‘s main train station and only a 15-minute walk from the historical center.Free WiFi and laundry services are also provided. Dormitory rooms with different capacities feature safety lockers and shared bathroom facilities. Towels are available at a charge. All rooms include bed linen. There is also a common kitchen on each floor.

For more places to stay in Bratislava you can check the latest prices here.

The 10 Top Things To Do In Bratislava

9 FUN Things To Do In Prague

6 Amazing Things To Do In Val Di Sole Trentino